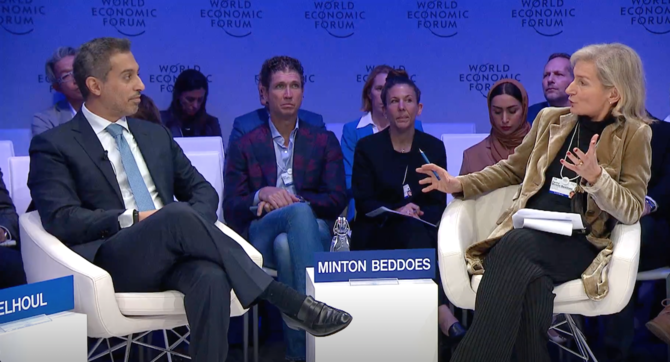 Teaching methods at one the UAE’s biggest universities were being transformed to better prepare students for the changing needs of the labor market, the country’s education minister said on Tuesday.
Ahmad bin Abdullah Belhoul was speaking during a panel session — titled “Preparing 1 Billion People for Tomorrow’s Economy” — at the World Economic Forum in Davos, Switzerland.

The minister told delegates that government owned Zayed University in Abu Dhabi was among Emirati institutions leading the way in adapting to the nation’s future workforce requirements.

He noted that as part of the preparations, the focus was shifting toward soft skills and more interdisciplinary fields of study.

Belhoul said: “There’s a gap between education outcomes and what the labor market requires today, that has always existed.

“But now, in the changing evolution of jobs, we are focusing a lot on soft skills such as adaptability, and we are looking on graduate students with interdisciplinary majors who are also able to adapt.”

He pointed out how Zayed University planned to phase out traditional university degrees by 2026 and launch interdisciplinary degrees, such as social entrepreneurship and business innovation, to meet post-coronavirus pandemic hybrid workplace needs.

“We are trying as much as we can to intertwine different fields of study to graduate students that are interdisciplinary but also focus on soft skills that we believe are going to be useful in the future,” he added.

Panel moderator, Zanny Minton Beddoes, the editor-in-chief of The Economist, said soft skills — including communication, time management, adaptability, curiosity, and a growth mindset — were now as important to the job market as science, technology, engineering, and mathematics skills were five years ago.

Belhoul said: “We can retrain someone technically, but if they don’t acquire the soft skills during the education system, it is difficult to train them later on.”

According to WEF studies, as technology shifted, companies tended to opt for green solutions, and as the global labor market adjusted to the fallout from the pandemic, up to 1 billion jobs would be radically transformed in the next decade.

By 2030, a WEF program aims to introduce critical interventions to provide better skills, jobs, and education for 1 billion people who may be at risk of being made redundant due to ongoing changes.

And since its launch in 2020, the forum’s re-skilling revolution initiative has been working with more than 350 organizations to provide 1 billion people with better education, skills, and economic opportunities by 2030.
#Coronavirus
Add Comment