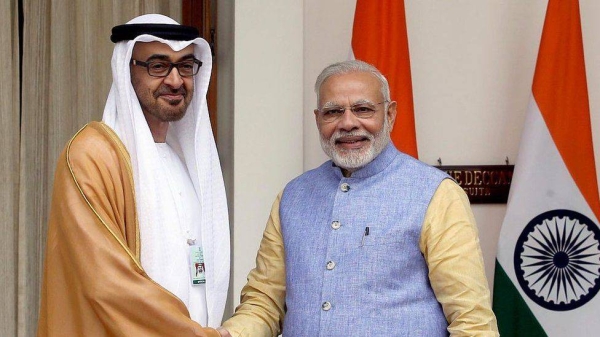 India's diplomatic nightmare over controversial comments made by two senior officials of the country's ruling party about the Prophet Muhammad (peace be upon him) is showing no signs of ending, with various countries summoning New Delhi’s envoy and demanding a public apology.
Saudi Arabia, the UAE, Oman, Indonesia, Iraq, the Maldives, Jordan, Libya and Bahrain have joined the growing list of countries in the Islamic world that have condemned the remarks.

Indian diplomats have been trying to placate these countries but the storm is far from over.

The right-wing party took no action against Sharma and Jindal until Sunday when a chorus of diplomatic outrage began, with Qatar and Kuwait summoning their Indian ambassadors to protest. Shortly afterward, the BJP suspended Sharma and expelled Jindal, and issued a rare statement saying it “strongly denounces insult of any religious personalities”.

On Sunday, Qatar demanded a “public apology” from New Delhi for the comments, as India’s Vice President Venkaiah Naidu visited the nation in a bid to bolster trade.

In a statement, Qatari Minister of State for Foreign Affairs Soltan bin Saad Al-Muraikhi said the BJP officials’ remarks “would lead to incitement of religious hatred, and offend more than two billion Muslims around the world”.

It added that Doha is expecting “a public apology and immediate condemnation of these remarks” from the Indian government.

“The Islamophobic discourse has reached dangerous levels in a country long known for its diversity and coexistence. Unless officially and systemically confronted, the systemic hate speech targeting Islam in India will be considered a deliberate insult against two billion Muslims,” Qatar’s Assistant Foreign Minister Lolwah al-Khater tweeted.

India's ambassador to Qatar, Deepak Mittal, said the remarks from some "fringe elements" did not represent the views of the Indian government.

Iran followed Qatar and Kuwait by summoning the Indian ambassador to protest in the name of “the government and the people”, state news agency IRNA said late on Sunday.

At least 15 countries, including Indonesia, Jordan, Libya, Maldives and Oman have lodged official protests with Indian embassies in those nations over the controversial remarks, Indian media reports said.

Bahrain welcomed the BJP’s decision to suspend Sharma over “provocation to Muslims’ feelings and incitement to religious hatred”.

Cairo-based Al Azhar University, one of Islam’s most important institutions, said the comments were “the real terrorism” and “could plunge the entire world into deadly crisis and wars”.

The Saudi-based Muslim World League said the remarks could “incite hatred”, while Saudi Arabia’s General Presidency of the Affairs of the Grand Mosque and the Prophet’s Mosque called them a “heinous act”.

The Jeddah-based Organization of Islamic Cooperation (OIC) said the remarks came in a “context of intensifying hatred and abuse toward Islam in India and systematic practices against Muslims”. India’s foreign ministry on Monday rejected comments by the OIC as “unwarranted” and “narrow-minded”.

In further criticism of the BJP’s Sharma, the Gulf Cooperation Council (GCC), an umbrella group for the six Gulf countries, “condemned, rejected and denounced” her comments.

India’s trade with the GCC, which includes Bahrain, Kuwait, Oman, Qatar, Saudi Arabia and the UAE, stood at approximately $90bn in 2020-2021.

Gulf countries are a major destination for India’s overseas workers, accounting for 8.7 million out of a worldwide total of 13.5 million, Indian foreign ministry figures show.

They are also big importers of produce – from India and elsewhere – with Kuwait importing 95 percent of its total food, according to its trade minister.

Kuwaiti media reported that the government asked New Delhi for an exemption after India announced a surprise ban on wheat exports in order to try to stabilize its local market.

Reports said on Monday that supermarket workers in Kuwait piled Indian tea and other products into trolleys in a protest against comments denounced as “Islamophobic”.

At the Al-Ardiya Co-Operative Society just outside Kuwait City, sacks of rice and shelves of spices and chillies were covered with plastic sheets. “We have removed Indian products”, signs in Arabic read.

“We, as a Kuwaiti Muslim people, do not accept insulting the prophet,” Nasser Al-Mutairi, CEO of the store, told the AFP news agency. An official at the chain said a company-wide boycott was being considered, AFP reported.

The remarks against the Prophet also led to anger in India’s neighbors Pakistan and Afghanistan.

India’s foreign ministry responded by calling Pakistan “a serial violator of minority rights” and said it should not engage “in alarmist propaganda and attempting to foment communal disharmony in India”.

Criticism also came from Kabul, with the Taliban administration saying the Indian government should not allow “such fanatics to insult ... Islam and provoke the feelings of Muslims”.

As outrage in the Muslim nations grew, the BJP on Sunday suspended spokeswoman Sharma and Delhi media head Jindal.

Modi’s party also faced anger from some of its own supporters, but it was for a different reason. Many Hindu nationalists posted comments on social media saying the government was buckling under international pressure.

Anti-Muslim sentiments and attacks have risen across India since Modi came to power in 2014.

Amir Ali, professor of political science at the Jawaharlal Nehru University in New Delhi, said the BJP’s “politics of polarization seems to have been halted somewhat at the international level”.

“Until recently, the government of India tended to brush aside concerns expressed by international human rights organisations and the US Committee on International Religious Freedom. The pushback from Arab countries assumes significance in the decisive response it has elicited from India,” he said.
#Afghanistan
Add Comment