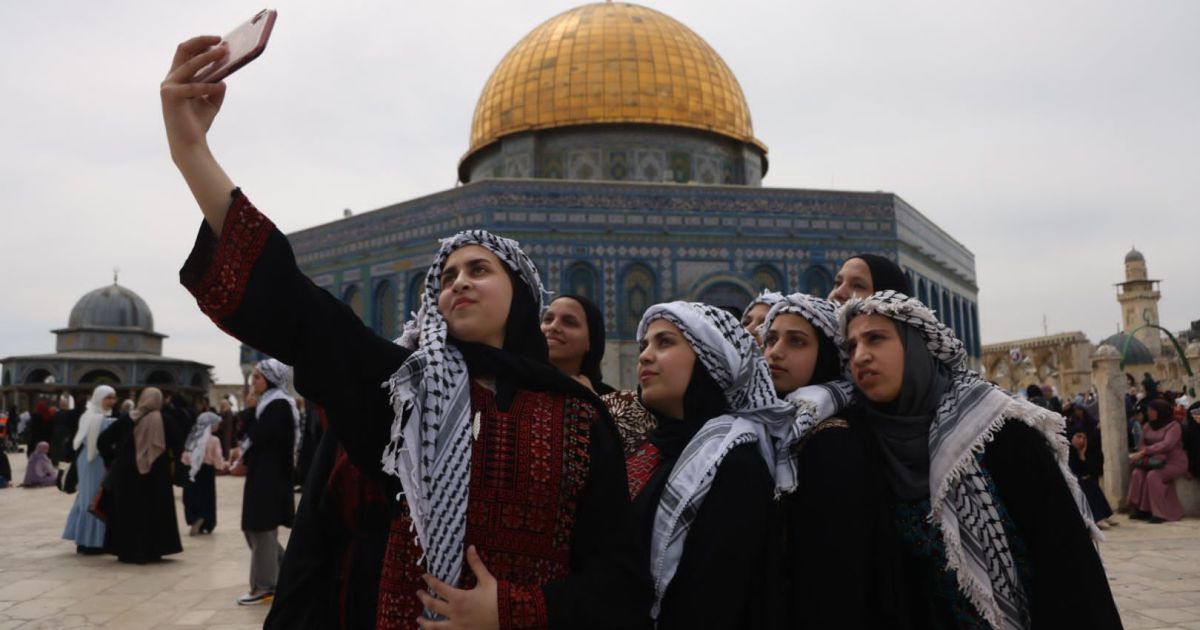 The third Friday prayers of Ramadan at the Al-Aqsa Mosque compound in occupied East Jerusalem were sandwiched by Israeli police attacks on Palestinians attending prayers, but that did not stop some 150,000 Palestinians travelling to the mosque to worship, according to the Jerusalem Islamic Waqf.

Israeli forces raided the mosque on Friday after dawn prayers, injuring at least 31 Palestinians, including three journalists, with rubber-coated bullets, stun grenades and tear gas. Israeli police said the raids were in response to Palestinians throwing rocks. Tear gas was also fired after Friday prayers, hitting Palestinians worshipping at the Dome of the Rock inside the Al-Aqsa Mosque compound.

Settler incursions under police protection during the past week during the Jewish festival of Passover had led to daily confrontations with Palestinians at the mosque, with many injured and arrested.

On the first day of Passover, April 15, Israeli forces injured at least 158 Palestinians and arrested 400 others inside the compound. Dozens more were injured and arrested throughout the week.

Despite fears of matters escalating on the ground, Palestinians have said that their continued presence at Al-Aqsa is imperative.

“I think it’s very important for people to come to Jerusalem and to Al-Aqsa. You feel belonging, you feel responsibility towards Jerusalem, to teach our children that this is our land, that Al-Aqsa is our religion,” Rana Mohammad told Al Jazeera at the compound.

The 36-year-old mother hails from Nablus in the occupied West Bank, and came to East Jerusalem with her husband and her five-year-old son.

“We cannot come on normal days, so you wait for this moment minute by minute. The feeling of being here is indescribable – you feel that your spirit is rejuvenated,” said Mohammad. 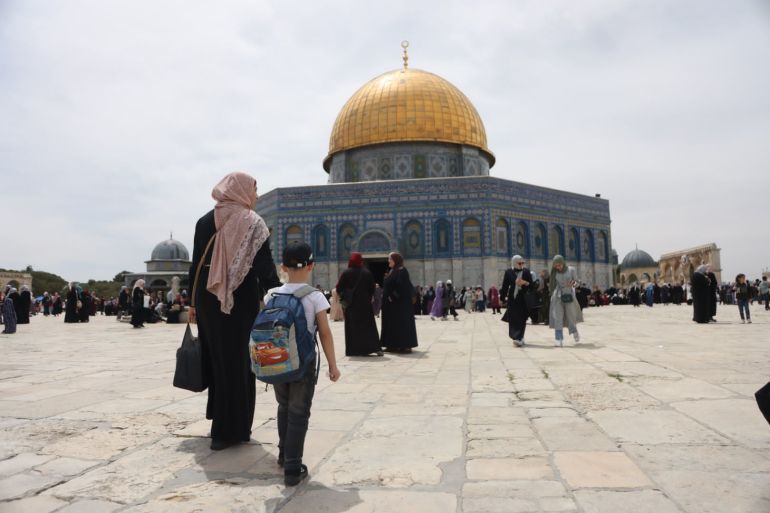 Rana came to Al-Aqsa with her son from Nablus

While Passover has ended and entrance into the mosque will be restricted to Muslims during the last 10 days of Ramadan, tensions on the ground in Jerusalem and in the occupied West Bank remain high.

A rise in attacks by Palestinians inside Israel led to the killing of 14 Israelis in three weeks. Meanwhile, Israelis have killed at least 43 Palestinians since the beginning of 2022.

Weeks of protests and raids by Israeli forces on Al-Aqsa during Ramadan last year escalated into a widespread uprising across Israel and the occupied Palestinian territories, and an 11-day assault on the besieged Gaza Strip.

The Al-Aqsa Mosque Compound has been a major flashpoint between the Israeli occupation and Palestinians for decades, and was the epicentre of the 2000-2005 Palestinian Intifada, or uprising.

The 14-hectare compound is one of the holiest in Islam, and houses the Al-Qibli Mosque (Al-Aqsa Mosque) and the Dome of the Rock.

Aya Abu Moussa, a 33-year-old from al-Lydd (Lod) inside Israel, said while she and her family are fearful of the political situation, they believe it is important to come to Al-Aqsa.

“There must be a large number of Palestinians at Al-Aqsa – we cannot leave it alone, at all. We see what happens to the youth here, we cannot leave them alone,” Abu Moussa told Al Jazeera, in reference to confrontations at the mosque. “The more people that come – the more they [Israel] will be afraid of raiding it. If there is nobody to block them, they will get too comfortable. The youth are limiting them,” she continued.

According to Abu Moussa, five large buses leave the towns of al-Lydd and al-Ramle (Ramla), in central Israel, every day in Ramadan for dawn and night prayers at Al-Aqsa.

“Ever since last year’s uprising in al-Lydd, there has been more awareness, especially among youth, of the importance of coming to Al-Aqsa and Jerusalem. We thought they would just keep playing PUBG, but no,” she said, referring to a popular computer game.

Yasmeen Tibi, a 21-year-old from Nablus in the occupied West Bank, echoed a similar sentiment.

“Our power is in numbers,” the university student told Al Jazeera. “Those who are able to come, should come. Every individual makes a difference, even if we don’t realise it.”

Tibi came to Al-Aqsa with her five sisters and her five female cousins, all donning traditional Palestinian thobes and a keffiyeh.

“We should not be afraid – we are the rightful owners of this land. They are the ones who should be afraid,” she said.

Palestinians from the West Bank must cross overcrowded checkpoints and wait for hours before being allowed to enter Jerusalem. Tibi said that she and her family had left Nablus at 7am and reached Al-Aqsa at 10am, in a journey that was more exhausting that it needed to be.

“They treated us like cattle at the checkpoint. Everyone was placed in small rows and squished together. We spent two hours inside Qalandiya checkpoint just waiting in line to cross through,” Tibi said, referring to the main checkpoint between the West Bank and East Jerusalem.

Israel has said the measures are necessary for security reasons. 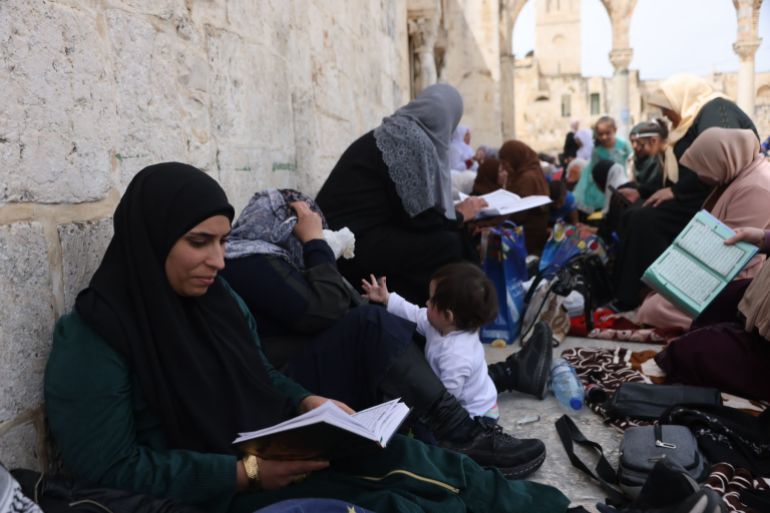 Finding a way in

While women of all ages are allowed to enter without a military permit on Fridays this Ramadan, only men over 50 or boys under 12 years old were given a similar privilege.

Men and boys who did not fit those criteria were either forced to apply for a military permit with no guarantee of obtaining one, or found other ways to enter.

Mohammad, 20, jumped off the eight-metre-high (26-foot-high) Israeli separation wall to make it to Al-Aqsa.

Despite the heightened Israeli security measures, Mohammed managed to make it through along with several of his friends. “I came to pray, and to defend Al-Aqsa from the [Israeli] occupation,” Mohammed, who hailed from the Aqabet Jaber refugee camp in Jericho, told Al Jazeera.

“Every Palestinian must come here, because the occupation raids the mosque, they fire tear gas and women are beaten here.”

“We are forced to confront them [Israel]. This is our land, and the Palestinian people will persevere until liberation.”

Meanwhile, Mohammad Asaad Saeed, a 57-year-old man from Tulkarem in the northern occupied West Bank, said the lack of leadership is what leads to confrontations.

“We need someone to lead us – to liberate Al-Aqsa,” Saeed told Al Jazeera.

“The Palestinians are defenceless. What the youth do in confrontations – this is what should be done by an entire army, not our young men. The problem is in our leaders.” 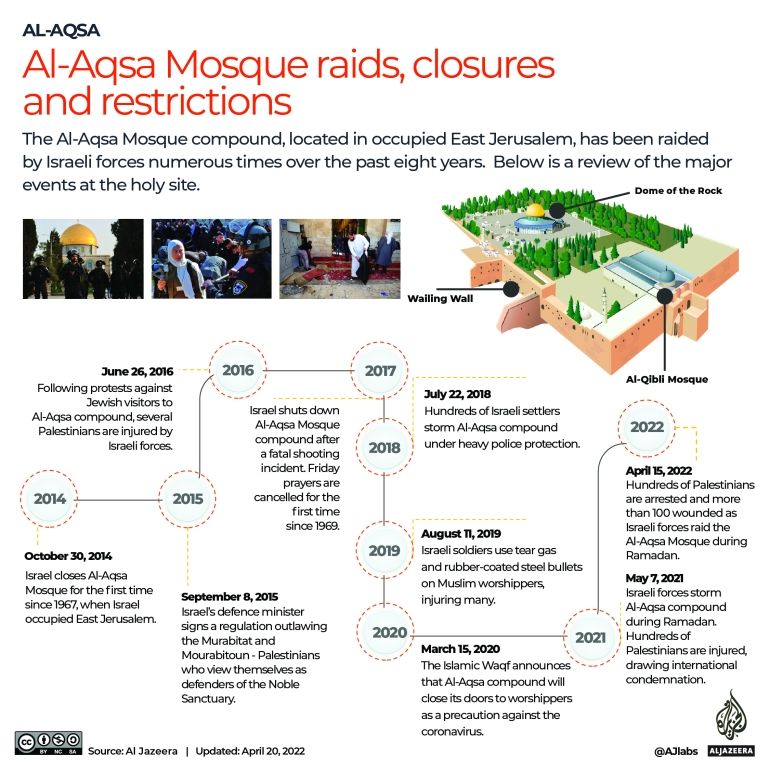