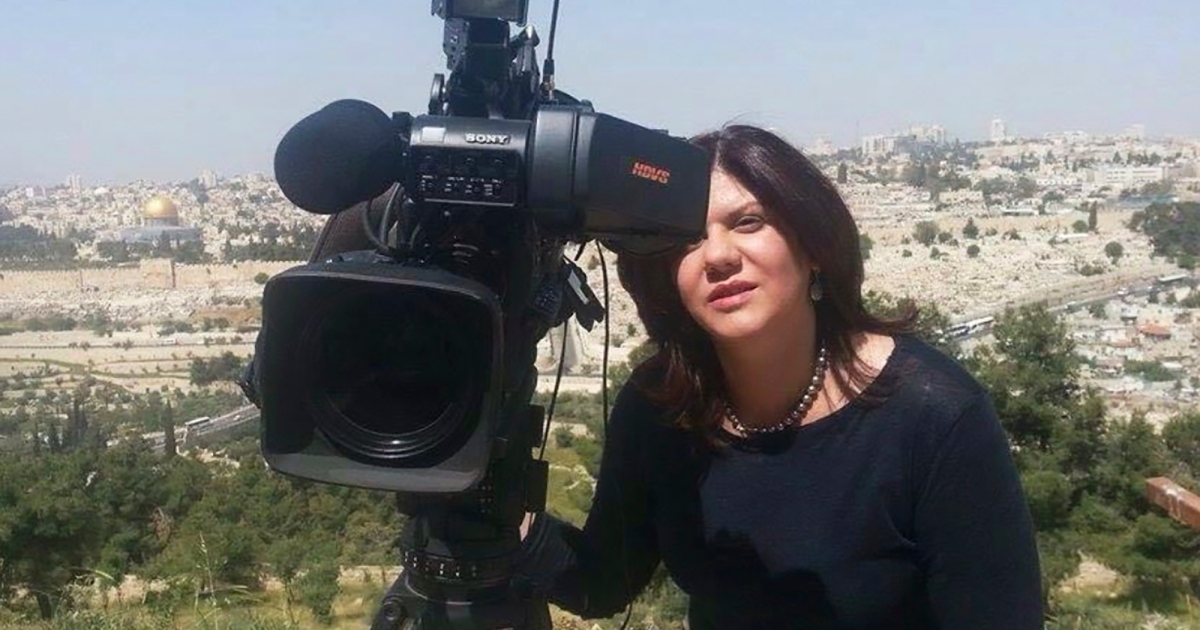 Al Jazeera obtains image of bullet that killed its journalist

An investigation by Al Jazeera has obtained an image of the bullet used to kill the network’s journalist Shireen Abu Akleh.

The photograph for the first time shows the type of ammunition used to kill the veteran Al Jazeera correspondent in the occupied West Bank last month.

According to ballistic and forensic experts, the green-tipped bullet was designed to pierce armour and is used in an M4 rifle. The round was extracted from her head.

The green-tipped bullet was analysed using 3D models and, according to experts, it was 5.56mm calibre – the same used by Israeli forces. The round was designed and manufactured in the United States, experts said.

“This M4 and this munition is used by the Israeli army. It is available and used by the units. I cannot say the whole unit, or most of the soldiers, but they use it,” al-Dwairi told Al Jazeera.

“When any soldier uses it, he uses it for a definite target – he wants to hunt, he wants to kill … There is no way to use it for another thing.”

Abu Akleh’s case was sent to the International Criminal Court (ICC) and the investigation was recently handed over to the ICC prosecutor. The status of the case, however, remains unclear.

“We think there is enough evidence with the prosecutor … that proves without reasonable doubt that the crime committed against Shireen Abu Akleh was done by the Israeli occupation and they are the perpetrators of this awful crime and they should be held responsible for it,” said Hijazi.

Abu Akleh was wearing a press vest and standing with other journalists when she was killed.

Israeli authorities initially said Palestinian fighters were responsible for her death, circulating video of Palestinian men shooting down an alleyway. However, researchers from the Israeli human rights group B’Tselem found the spot where the clip was filmed and proved it was impossible to shoot Abu Akleh from there.

In an interview, Omar Shakir – Israel and Palestine director at Human Rights Watch – said all evidence indicates the kill shot came from an Israeli soldier.

“We have documented at least 19 journalists who were killed by Israeli fire, some of them in the Gaza wars in vehicles marked as press in 2012 and 2014,” Mansour said.

“Some of them were also killed by Israeli snipers while wearing vests with press signs, away from any threatening situation, two of them in 2018. Clearly, we have a problem here of trigger-happy policies that allows this to continue.” 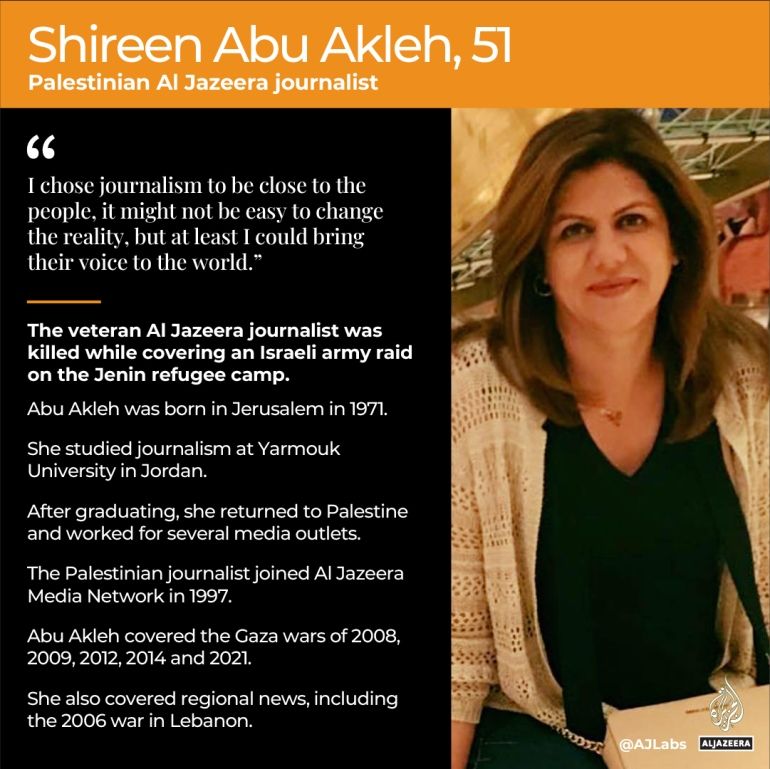 In what appeared to be an unprovoked assault at the Al Jazeera correspondent’s funeral days after she was killed, Israeli officers attacked pallbearers, which almost caused them to drop Abu Akleh’s coffin – an incident broadcast live that caused international outrage.

An Israeli police investigation into the attack concluded no one should be punished, despite finding there had been police misconduct, the Israeli newspaper Haaretz reported.

Al Jazeera’s Nida Ibrahim, reporting from Ramallah in the occupied West Bank, said for Palestinians their version of events is being “confirmed by so many investigations”, including the latest one by Al Jazeera.

“Palestinians have been saying from day one that they know that the bullet that hit Shireen came from Israeli soldiers. The witnesses, the videos that we’ve seen from Palestinians who were there, show there were no Palestinian fighters around the area where Shireen was in,” Ibrahim said.

“Palestinians are seeking now is justice and accountability.”

A dual Palestinian-US national, Abu Akleh was one of Al Jazeera’s first field correspondents, joining the network in 1997.

Ori Givati, a former Israeli soldier now with the advocacy group Breaking the Silence, said the round that was analysed was a “very common bullet”.

“It is the bullet that most [Israeli] soldiers use during their service,” he told Al Jazeera. “This investigation into Shireen’s killing is extremely important, but we also have to remember these incidents happen on a weekly basis.

“Our country understands that if you really look into these cases it all goes back to the root cause. It is why the system is terrified from actually conducting investigations. I haven’t seen Israel really investigate any incident.”