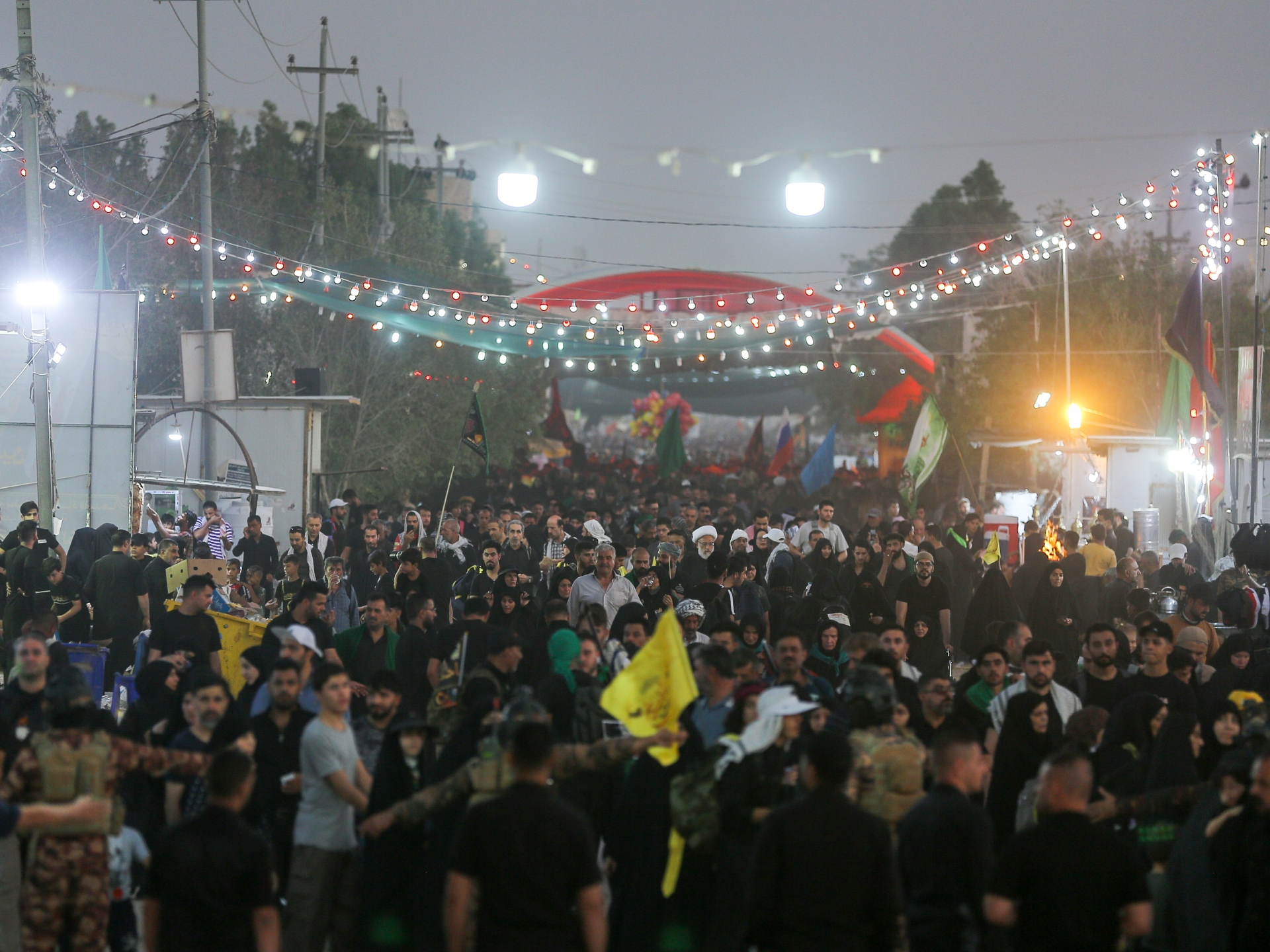 Shia pilgrims arrive in the holy city of Karbala on Friday to commemorate the martyrdom of Imam Husayn.

Irfan Gangjee is one of the millions of Shia Muslims who have travelled on foot for days to reach the holy city of Karbala in Iraq to participate in Arbaeen – one of the largest annual religious events in the world.

The Pakistani citizen, who lives in the United States, started his journey on Monday in Najaf – 180 kilometres (111 miles) south of the capital city of Baghdad – walking nearly 80km (50 miles) to reach Karbala on Thursday, the site of al-Husayn’s shrine and resting place.

Arbaeen itself will begin on Friday evening and end on Saturday evening. 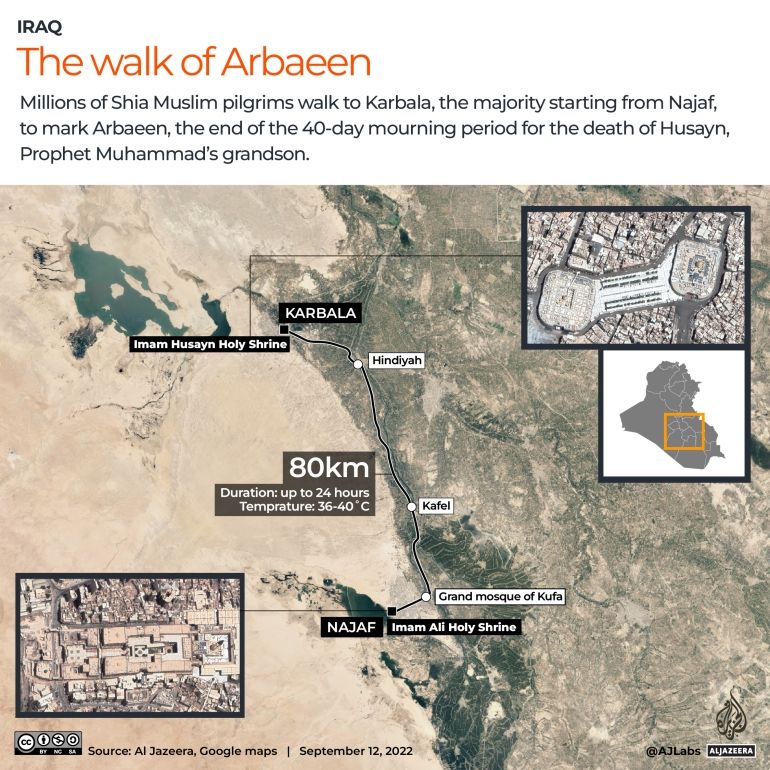 “The experience was surreal … there are oceans and oceans of people here. People on crutches and wheelchairs were walking with us … women and children too,” the 35-year-old Gangjee, on his first Arbaeen in Iraq, told Al Jazeera.

The occasion is observed 40-days after Ashura – the commemoration of the death of the Prophet Muhammad’s grandson, Husayn, in the Battle of Karbala, which took place in 680 AD on the 10th day of Muharram, the first month of the Islamic calendar. 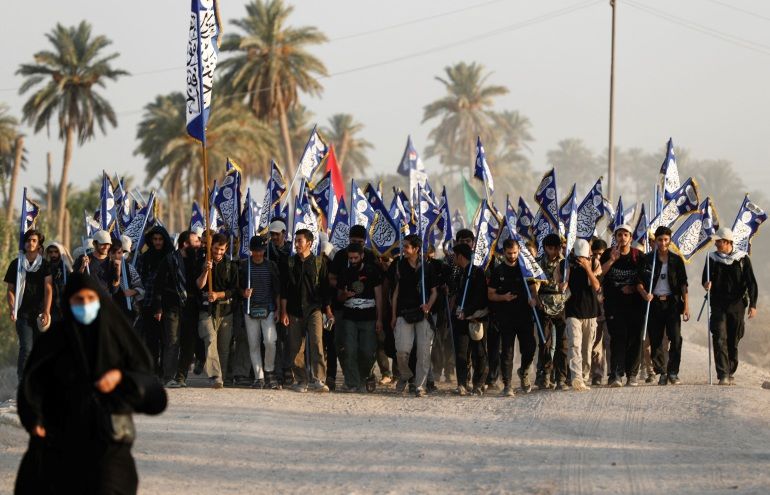 Husayn and his small party were vastly outnumbered, and killed after a short battle against the forces of the Umayyad Caliph Yazid I.

The event is regarded as one of the foundational moments of Shia Islam.

In 2019, it was estimated that the annual pilgrimage had brought together more than 14 million people from across the world, including Iran, Lebanon, Indonesia and the US.

The journey can be strenuous.

Sara Mushtaq, a 35-year-old woman from Karachi, Pakistan, said at one point during the walk that her “feet just wouldn’t move” and described briefly collapsing on the side of the road.

The journey is especially challenging during daytime, when temperatures range between 36 and 41 degrees Celsius. Together with packed crowds, reports of people fainting due to exhaustion or feeling dehydrated are not uncommon. 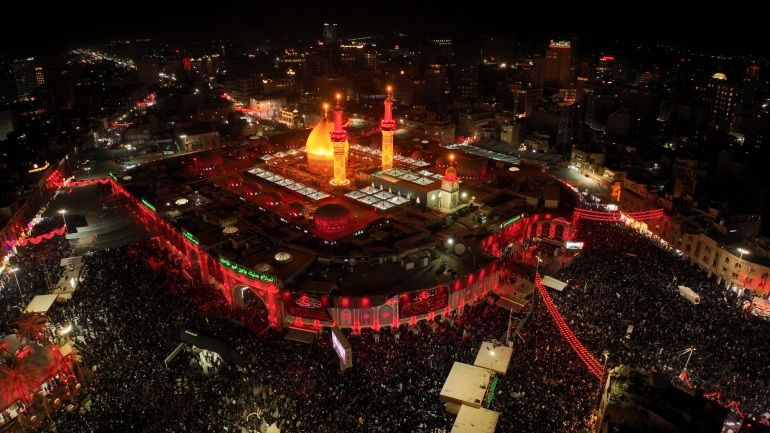 An aerial view shows the shrines of Imam al-Abbas ahead of Arbaeen in Karbala, Iraq, September 15, 2022

To facilitate zaireen (pilgrims), local volunteers, as well as foreigners, setup mawakeb (rest areas), makeshift stalls and clinics all along the roads to provide essentials such as food, water and beds.

“This one mawakeb I stayed overnight had served some 1,000 people a day. And its all for free … they don’t ask for anything in return,” Gangjee, a finance professional, said. “It is hard to fathom the scale at which this gathering is taking place.”

According to Mehdi Hazari – a Shia religious scholar and the head of education and research at the Imam Mahdi Association of the Marjaeya (IMAM) in the United States – a major reason for the non-obligatory pilgrimage is “searching for “inspiration in this world for which Imam Husayn died for”.

“In this world where there is so much noise … things are happening everywhere. Today we can hear about one event in one part of the world to the next with the press of a button our phone. It creates a blindness of sort … we have become complacent,” he said from North Carolina.

“So the walk … is where a person can find their heart awakened … meaning there is this sense overwhelming sense of giving, of sharing without asking for anything in return that creates this humanity, a type of brotherly and sisterly love.” 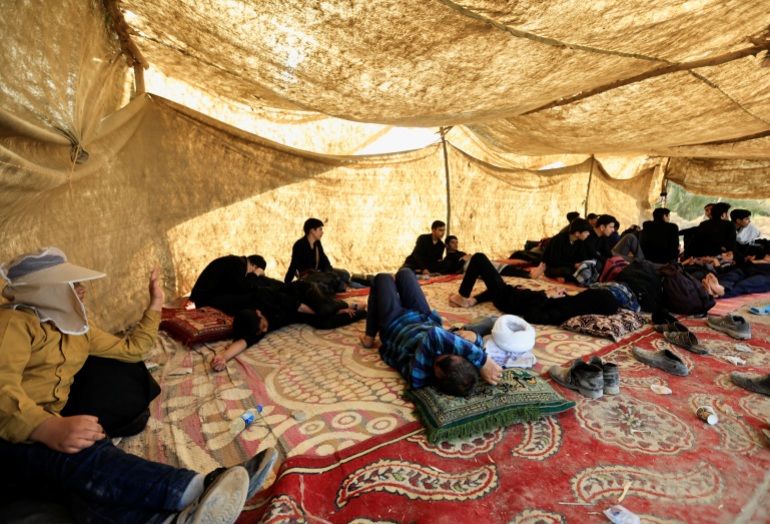 Pilgrims rest during the walk to Karbala ahead of Arbaeen in Najaf, Iraq

Echoing Hazari’s sentiments, Mushtaq said that the trip had completely broken her down “physically, mentally and spiritually” and that she now had the chance to rebuild herself.

“What I hope to gain is to take this feeling with me back to reality. Here people see the best version of you. When you go home, this feeling will last a week, a month maybe?” she said.

“I want to incorporate this experience into my daily life … and teach my kids what it really means to be a lover of Husayn.”

This year is the first time since the coronavirus pandemic began in March 2020 that Arbaeen will take place without restrictions or a cap on foreign travellers.

Last year, Iraqi authorities limited the number of foreign travellers to 40,000 people, with 30,000 allowed from Iran.

There has, however, been political instability to worry about this year.

Tensions between Shia political forces led to an outbreak of violence on the streets of Baghdad at the end of August, leaving more than 30 people dead. 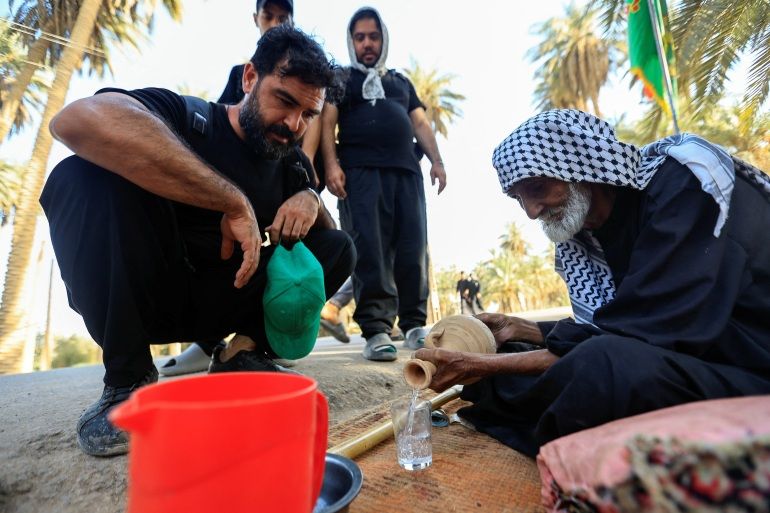 An Iraqi volunteer pours water for pilgrims during the walk to the holy city of Kerbala, ahead of the holy Shi’ite ritual of Arbaeen, in Najaf, Iraq

Some countries began urging their citizens not to travel to Iraq as a consequence.

However, for Gangjee, nothing was going to stop him.

“Sometimes you just have a calling. In the first 10 days of Muharram this year I made the decision to go … I spoke to my wife and booked my trip immediately,” Gangjee said.

“It never occurred to me after that to cancel my flight. The only way I would not go is if they didn’t allow me in.”