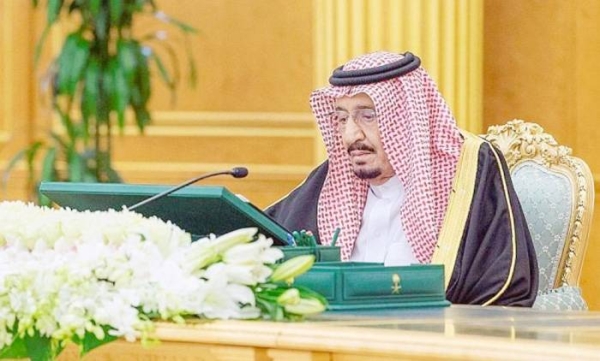 The Cabinet also issued a call for an international conference to mobilize financial resources to support the Yemeni economy and provide oil derivatives.
The Cabinet, chaired by Custodian of the Two Holy Mosques King Salman on Tuesday evening at Al-Salam Palace in Jeddah, reiterated the Kingdom's keenness for Yemen to enjoy security, stability and prosperity, and extended full support for the Yemeni Presidential Leadership Council to fulfill the implementation of the requirements of the transitional phase and end the crisis.

The Cabinet also issued a call for an international conference to mobilize financial resources to support the Yemeni economy and provide oil derivatives.

It underlined the paramount importance that the Kingdom attaches to consolidating security and stability in the region and the world at large, supporting dialogue, peaceful solutions and appropriate conditions that support development and achieve peoples' aspirations for a better future.

At the outset of the meeting, the Cabinet highlighted the honor that the Almighty Allah has bestowed on this blessed country to serve the Two Holy Mosques, pilgrims and Umrah performers, citing the interest of the Kingdom to keep Hajj rituals steadily organized in light of the coronavirus as well as the restrictions and implications the pandemic imposed on the entire world.

In this regard, the Cabinet considered the decision to increase the number of pilgrims coming from inside and outside the Kingdom to attend this year's Hajj to one million as a step that stems from the Kingdom’s constant keenness to enable as many Muslims as possible from around the world perform the rituals in an atmosphere of spirituality and tranquility, while maintaining health gains achieved against the pandemic.

In a statement to the Saudi Press Agency (SPA) following the meeting, Acting Minister of Media Dr. Majid Bin Abdullah Al-Qasabi said that the Cabinet reviewed the outcomes of the 151st meeting of the GCC Foreign Ministers, held under the presidency of the Kingdom, citing the meeting's review of the latest developments of the joint efforts as well as the regional and international issues and efforts to combat terrorism.

Upon reviewing the results of the joint annual meetings of the Arab financial institutions, the Cabinet affirmed that the Kingdom will continue to be supportive for joint Arab action, contributing to the development of economic relations among Arab countries through regional institutions and remain proactive in extending a helping hand to confront emergency and humanitarian crises, as well as support development and social efforts.

The Cabinet hailed the Kingdom's positions it confirmed before the donors conference dedicated to financing the international (COVAX) mechanism aimed at providing anti-COVID-19 vaccines, its support from the international community to ward off any potential risks posed by future developments of coronavirus pandemic, and continue to respond to the needs of the countries and support international efforts in this regard.

On local affairs, the Acting Minister of Media pointed out that the Cabinet blessed the launch of the largest expansion in the history of Quba Mosque in addition to developing its surrounding area to accommodate 66,000 worshipers, generated from the great care that this blessed country accords to mosques.

The Cabinet also praised the success of the National Campaign for Charitable Action enabling donors to make their donations in a secure digital way, and pave the way for them to reach their destinations inside the Kingdom directly and with highest efficiency and reliability through the programs and projects of (Ehsan) platform, which has received more than SR1,780,000,000 (one billion seven hundred and eighty million riyals) since its launch, with a total donation operations that exceeded 23 million in the fields of charitable works and humanitarian giving.

The Cabinet authorized the Minister of Tourism to discuss with the Iraqi side and sign a draft memorandum of understanding between the Ministry of Tourism of Saudi Arabia and the Ministry of Culture, Tourism and Antiquities of the Republic of Iraq for cooperation in the field of tourism.

It authorized the Chairman of the Board of Directors of King Abdulaziz City for Science and Technology (KACST) to discuss with the American side a draft protocol to extend and amend the scientific and technical cooperation agreement between the government of Saudi Arabia and the government of the United States of America.

The Cabinet approved the executive regulations for the judicial costs system; approved the organization of tourism development councils in the Kingdom's regions and authorized the controls for allowing government health practitioners to work in the private health sector outside official working hours.
#Coronavirus  #Vaccines  #COVID-19  #Covax  #Covid
Add Comment