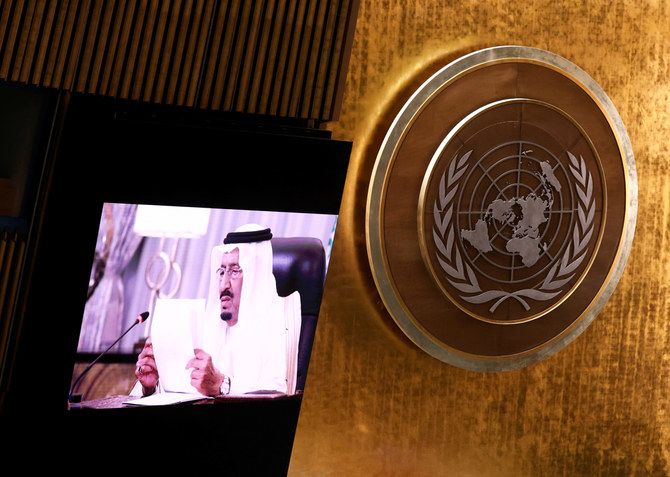 Does the Gulf need a Helsinki moment?

In his speech before the UN General Assembly last month, King Salman laid down Saudi Arabia’s foreign policy principles and expressed some hope about the ongoing Saudi-Iran talks, the latest of which took place on Sept. 21, the day before the king’s speech.
King Salman said that, as a UN founding member, Saudi Arabia is committed to the organization’s principles and goals, including world peace and security, the peaceful resolution of disputes, respect for states’ sovereignty and independence, and noninterference in their internal affairs.

The king described Iran as a neighbor, expressing hope that the two countries’ preliminary talks would yield tangible results on which to “build confidence and prepare the ground for achieving our peoples’ aspirations for establishing cooperative relations, based on commitment to the principles of international law and UN resolutions, respect for sovereignty, noninterference in internal affairs, and ceasing support for terrorist groups and sectarian militias.”

King Salman also called for multilateral cooperation to fight COVID-19, citing Saudi Arabia’s contribution of about $800 million to that effect during its G20 presidency in 2020, in addition to the substantial humanitarian and development aid it provides to poor countries. He referred to the Kingdom’s commitment to fighting climate change through a number of green initiatives and helping the global economic recovery by striving for oil market stability. Referring to Iran’s nuclear program, King Salman stressed Saudi support for the principle of nonproliferation of all weapons of mass destruction and to the international efforts to ensure that Iran’s program does not lead to the development of nuclear weapons.

By contrast, Iranian President Ebrahim Raisi’s remarks before the UN were largely a diatribe against the US. Despite the Biden administration’s conciliatory overtures toward Iran, Raisi was scathing. More importantly, his speech was largely devoid of any real commitment to the UN principles or international law in general. He said that Iran’s policy was to “preserve stability and national sovereignty for all states in the region,” but only in the context of Iran’s role in Iraq and Syria, citing in particular the work of Qassem Soleimani and Abu Mahdi Al-Muhandis.

Raisi concluded his speech, almost as an afterthought, by declaring that Iran, “while defending the rights and interests of the Iranian people, would also seek economic and political cooperation with the world,” adding that he would seek “active engagement with all nations, especially neighboring countries.”

The Iranian president’s reliance on fiery rhetoric and revolutionary slogans undermined any message of peace and reconciliation he might have wanted to project during his first UN appearance, just weeks after he took office. By preferring to play up to the hard-line choir back home and carefully avoiding any commitment to international law and the global rules-based system, Raisi underscored the need for greater efforts to bring the region closer to peace.

At a press conference held in Riyadh on Sunday, Saudi Foreign Minister Prince Faisal bin Farhan said that discussions with Iran were “still in the exploratory phase,” hoping that they would provide a “basis to address unresolved issues between the two sides and we will strive and work to realize that.” Several rounds of talks have taken place during this year, most recently last month, on the same day as Raisi gave his UN speech.

Saudi Arabia has expressed hope that the talks will ease tensions, but played down expectations of a major breakthrough. Given Raisi and other Iranian officials’ recent harsh rhetoric, the region would prefer to judge the Iranian president by the actions his government takes on the ground.

Since coming to power in August, there have been considerable escalations in Yemen, Iraq and Lebanon. In Yemen, for example, the Iran-backed Houthis are pushing for a military solution, attacking population centers and camps for the internally displaced with ballistic missiles and drones, wreaking havoc and pushing the country to the edge of a humanitarian abyss.

Triumphalist rhetoric has also been up, perhaps aiming to derail any hope that Saudi-Iranian talks could succeed. A prominent Iranian military commander said that Iran had created “six armies outside its borders that work for it.” According to Maj. Gen. Gholam Ali Rashid, commander of the Khatam Al-Anbiya militia, these armies’ main mission is to defend Tehran against any attack.

In a statement carried by the official Mehr News Agency last month, he named them as Hezbollah of Lebanon, Hamas and Islamic Jihad in Palestine, the Assad forces in Syria, Iraq’s Popular Mobilization Units, and the Houthi militia in Yemen, adding that they were supported by the leadership of the Islamic Revolutionary Guard Corps and the General Staff of the Armed Forces.

Some of the groups mentioned may cringe at the suggestion that their main mission is to defend Iran. A Hamas leader publicly disagreed with the suggestion, but others may be afraid to contradict the general.

Past attempts at reconciliation were derailed by statements similar to those made by Rashid. It could be just bad timing that his comments coincided with the Saudi-Iran talks, but the statement may also have been precisely calculated to derail them.

Knowing how fraught the issues separating the two shores of the Gulf are, it should be expected that the slightest success may produce negative reactions from some actors. To guard against the naysayers, there may be a need to anchor these preliminary discussions on some clear, agreed-upon guiding principles.

In exchanges of letters with Iran during the Rouhani presidency, the Gulf Cooperation Council sought to establish that common ground. King Salman’s UN remarks could also be seen as laying the groundwork for that common understanding, as he cited the UN principles of sovereignty and the inviolability of borders.

The Soviet-Western Helsinki process of the 1970s succeeded, albeit partially and slowly, because the parties agreed on and adopted a set of parameters, largely derived from the UN Charter.

Its Declaration on Principles Guiding Relations between Participating States, aka “The Decalogue,” listed 10 such principles, including sovereign equality, refraining from the threat or use of force, the inviolability of frontiers and territorial integrity of states, the peaceful settlement of disputes, nonintervention in internal affairs, and “fulfillment in good faith of obligations under international law.”

Another set of ideas agreed to in the Helsinki process promised economic, scientific and technological cooperation, the facilitation of business contacts and industrial cooperation, and a linking of transportation networks.