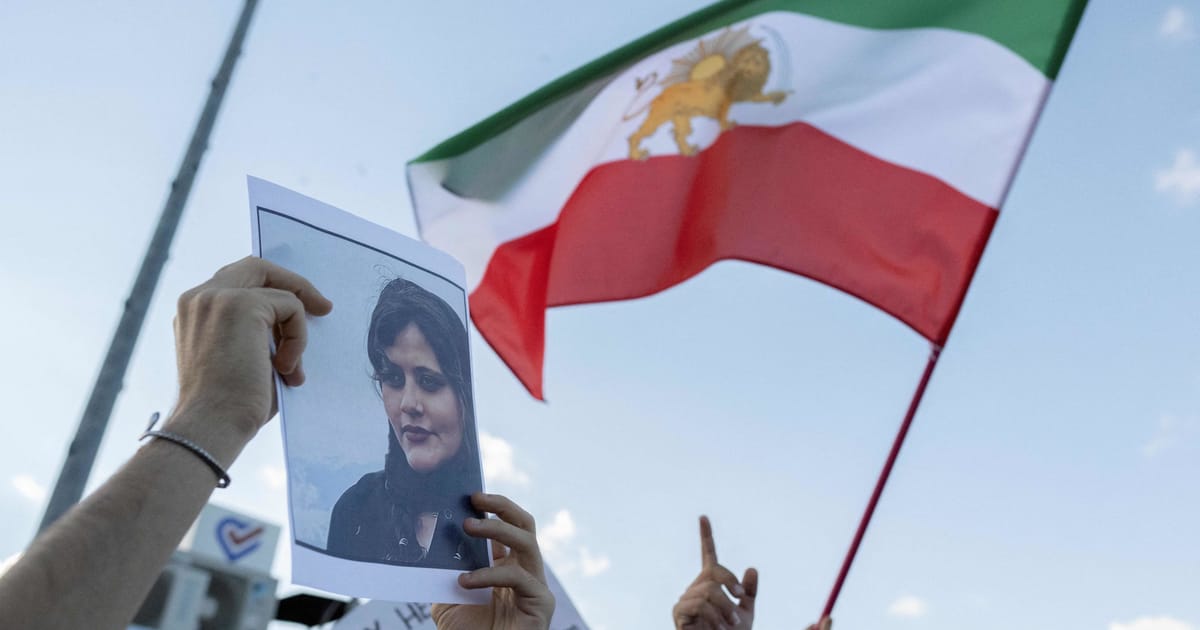 Fear of the regime is eroding in Iran

Tehran’s theocrats face two of the biggest threats authoritarian regimes can encounter: a women-led revolt and public ridicule.
Women’s rights and feminist movements can be a powerful tool against autocracy; while ridicule can erode a regime’s morale, breaking down its mystique and rule of fear.

Openly bearing both of these powerful components, the weeks-long nationwide protests in Iran against the ayatollahs, held in the wake of the death of Mahsa Amini — a 22-year-old Kurdish woman who died in custody after being arrested for wearing her hijab improperly — now have seasoned watchers, and foreign governments, scrambling to assess whether the public backlash could lead to the fall of the regime.

Iran has seen anti-government protests before. Most notably in 2009, when the so-called Green Movement emerged to challenge the rigged presidential election, and protesters demanded the removal of Mahmoud Ahmadinejad from office. The agitation lasted for months, well into 2010, but eventually ran out of steam, partly because its leaders were jailed.

In 2019, the regime faced a rolling series of fierce protests once more, this time sparked by the ending of fuel subsidies and a severe price hike. Demands rose for the ouster of Supreme Leader Ali Khamenei, after the ayatollahs and the security forces resorted to even greater violence than seen in 2009 to restore order, as an estimated 1,500 people were killed in a week.

This time, though, the protests feel different and more dangerous for the regime.

Protesters were chanting “Death to the Dictator” virtually from the start, echoing the rallying cry of 1979, when the shah of Iran was ousted. And despite 12,000 arrests in the past six weeks, protesters haven’t been deterred, nor have they let up, refusing to be intimidated by threats and ultimatums.

“Today is the last day of the riots,” Major General Hossein Salami, the commander of the Islamic Revolutionary Guard Corps (IRGC) — the regime’s key enforcer — announced Saturday. But the declaration failed to quell the protests, and hundreds of Iranians continued to hold rallies and sit-ins in Tehran this week, chorusing, “Don’t be afraid, we’re all together.”

Compared to the agitations of both 2009 and 2019, the current protests have two new notable features. For one, outraged by the needless death of Amini and tired of being bossed around and bullied by the patriarchal, misogynist ayatollahs and their henchmen, Iranian women are the ones galvanizing the revolt.

“Jin, Jiyan, Azadi” (Women, Life, Liberty) is the chant that’s been adopted. First used by Kurdish women activists and fighters late last century in Syria, Turkey and Iran, this slogan was then taken up by European feminists in 2015, when demanding an end to violence against women. And in Iran, now, despite its Kurdish antecedents, the chant has been embraced by women from different sects and ethnicities as they defiantly — and with increasing self-confidence — throw off their hijabs and confront the regime.

Despite the ramped-up repression and an estimated 272 deaths so far, it isn’t clear whether Iran’s overstretched security forces actually have the stomach for massacring women.

Interestingly, the Revolutionary Guards, who have a long track record of crushing dissent, have yet to be deployed, and some Iran-watchers have suggested that while IRGC commanders want a crackdown, their rank-and-file seem less than eager — after all, their own relatives are likely participating.

Intriguingly, some of the most intense protests thus far have been seen in the traditionally conservative towns of Qom and Mashhad. And the IRGC may also be calculating that violence against female protesters can all too easily backfire and further delegitimize the regime.

High levels of women’s participation in civil unrest can be hugely problematic for authoritarian regimes, according to Erica Chenoweth, a leading expert on the history of civil resistance, mass movements and political repression. She and colleague Zoe Marks, a lecturer in public policy at the Harvard Kennedy School, recently created a dataset and found that with “movements where women were participating in high numbers, they were more likely to succeed and to usher in more periods of sustained democratization.”

On the Iran protests in particular, Chenoweth notes: “The remarkable size and resilience of these protests are directly tied to the central participation of women.” She says that, “From the start, women have set the tone of these protests and have found innovative ways to register their anger with the government. Although men have also participated in large numbers, they have done so in the name of Amini and by embracing more feminist rhetoric than ever before.”

“Movements with large numbers of female participants also tend to be perceived as more legitimate in the eyes of observers, who often respond to the symbolic power of grandmothers and schoolgirls protesting bravely,” Chenoweth adds.

Another innovative method being utilized against the ayatollahs this time around is also ridicule and mockery — from the burning of hijabs to flicking turbans off the heads of passing clerics. Being accosted has become so common, some clerics are now reportedly avoiding wearing their turbans and cloaks in public.

“Dictators, tyrants, and those [who] aspire to seize and keep power by intimidation and force can tolerate no public ridicule,” according to national security expert J. Michael Waller’s paper on the effectiveness of ridicule as a weapon.

“They generally harbor grandiose self-images with little bearing on how people really think of them. They require a controlled political environment, reinforced by sycophants and toadies, to preserve an impenetrable image,” he adds, noting that, “Control is the essence of an authoritarian movement or dictatorship. Jokes and contempt know no philosophy and a good laugh, even of the gallows humor variety, spread virally, almost impossible to control.”

So, Iran’s theocrats are now facing two of the biggest threats any authoritarian regime can encounter — a women-led revolt and public ridicule.

Separately, even the most resolutely repressive authoritarians can find either of these threats hard to contain, but when merged as a twin challenge, feeding off each other, the danger is exponentially greater.
Add Comment