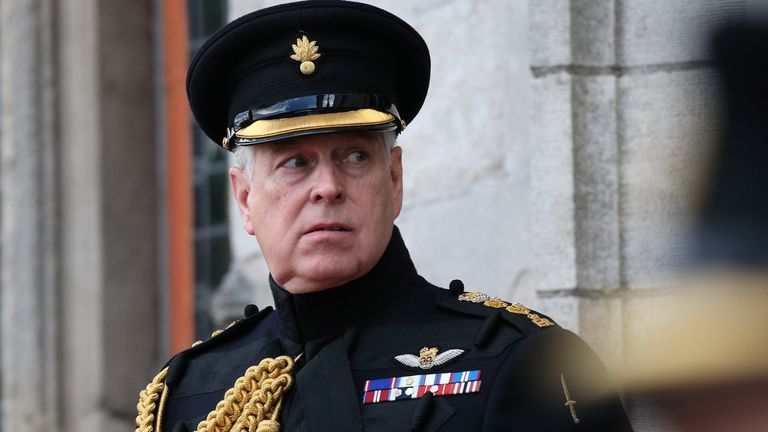 Prince Andrew failed to convince a judge to toss a lawsuit accusing him of sexually abusing a teenage girl decades ago. In a 46-page document, Judge Lewis Kaplan said the royal's motion to have the case dismissed was "denied in all respects", meaning a civil trial will take place later this year.

Virginia Giuffre claims the British royal was one of several powerful men to whom Jeffrey Epstein “lent” her for abuse as a teenager. Andrew has denied her allegation but also argued to a federal judge in New York that he’s shielded from the suit by a 2009 settlement between Giuffre and Epstein.

Prince Andrew has denied the allegations and had moved to dismiss the suit.

A federal judge in New York on Wednesday denied a motion to dismiss a lawsuit against Prince Andrew filed by Virginia Giuffre, a woman who alleges she was sexually trafficked to the royal when she was underage.

"Ms. Giuffre's complaint is neither 'unintelligible' nor 'vague' nor 'ambiguous,'" Judge Lewis Kaplan wrote in the ruling. "It alleges discrete incidents of sexual abuse in particular circumstances at three identifiable locations. It identifies to whom it attributes that sexual abuse."

Andrew's motion was to dismiss Ms Giuffre's complaint as "legally insufficient - not to determine the truth or falsity of charges in her complaint", according to the judge.

He said the prince "relies mainly, although not exclusively" on a 2009 agreement between Ms Giuffre and Jeffrey Epstein, who she alleges trafficked her to have sex with the royal.

The duke had argued that Ms Giuffre waived her right to sue him when she signed a $500,000 settlement with Epstein.

The judge said the court was prohibited "at this stage" from considering Andrew's efforts to "cast doubt on the truth of Ms Giuffre's allegations".

The judge said the agreement between Epstein and Ms Giuffre was "the crux" of Andrew's motion.

The royal had argued Ms Giuffre's claims against him were "barred" by the terms of the settlement, he added.

The 2009 document said Ms Giuffre had agreed to "release, acquit, satisfy, and forever discharge" Epstein and "any other person or entity who could have been included as a potential defendant".

The judge said there were "two pivotal issues"; whether the language in the agreement "unambiguously applies" to Andrew, and whether the duke - who was not mentioned by name in the settlement - was entitled to invoke it.

"The 2009 agreement is far from a model of clear and precise drafting," the judge said.

On whether Andrew was a "potential defendant" in the 2009 case, the judge said that "unless the terms of an agreement leave no unreasonable doubt… the ambiguity must be resolved by the trier of fact, ordinarily a trial jury".

The judge said "better drafting" of the 2009 agreement "could have eliminated any uncertainty" but the meaning of the phrase was "far from self-evident".

The judge said that "at one level… literally anyone 'could have been included as a… defendant'".

"If the plaintiff had wished to include someone else - anyone else - as a defendant, she easily could have done so," he added.

"Someone can be included as a defendant in a lawsuit simply by including that person's name in the caption of a complaint. Nothing else is required."

The judge said logic suggested Ms Giuffre and Epstein had "competing goals" and the "muddled" language in the agreement "may have arrived at something of a middle ground".

"It is enough to conclude that the meaning of this pivotal phrase in the contract is not by any means unambiguous and free of conflicting inferences," he went on.

"The agreement is therefore ambiguous. Accordingly the determination of the meaning of the release language of the 2009 agreement must await further proceedings."

The judge said the confidentially clause of the 2009 agreement "could reasonably be interpreted" that " no one was intended to use the terms… in any proceeding or case involving Epstein".

"The 2009 agreement cannot be said to demonstrate, clearly and unambiguously, the parties intended the instrument 'directly,' 'primarily,' or 'substantially,' to benefit Prince Andrew," he added.

The judge said that Ms Giuffre's claim that she was forced to sit on Andrew's lap while he touched her was "sufficient to state a battery claim under New York law, regardless of which part/parts of her body defendant ultimately is alleged to have touched".

He added that "it should go without saying that the alleged conduct, if it occurred, reasonably could be found to have gone 'beyond all possible bounds of decency and is intolerable in a civilised community'."

He said Ms Giuffre "asserts that the alleged battery caused some measure of 'extreme emotional distress' and 'psychological trauma'."

The judge said Andrew's motion for "a more definite statement" on Ms Giuffre's allegations was "meritless".

"Ms (Virginia) Giuffre's complaint is neither 'unintelligible' nor 'vague' nor 'ambiguous'," he added.

"It alleges discrete incidents of sexual abuse in particular circumstances at three identifiable locations. It identifies to whom it attributes that sexual abuse.

"While he understandably seeks more detail about the precise details of (Ms Giuffre's) claims, he will be able to obtain that detail during pretrial discovery."

The judge said Andrew's suggestion that he "cannot reasonably prepare a response" to Ms Giuffre's allegations "plainly contradicts" his previous documents in which he denies her claims "in no uncertain terms".

In his conclusion, the judge said: "For all the foregoing reasons, defendant's motion to dismiss the complaint or for a more definite statement is denied in all respects."

He added that "given the court's limited task of ruling on this motion, nothing in this opinion or previously in these proceedings properly may be construed as indicating a view with respect to the truth of the charges or counter-charges".

Andrew, who denies the allegations against him, has until July 14 to potentially answer questions about the case under oath, following a ruling made by Kaplan last year. If the case is not settled, Prince Andrew could face a trial date between September and December 2022.

Giuffre alleged in the lawsuit that the late financier Jeffrey Epstein trafficked her and forced her to have sex with his friends, including the Prince, and that Andrew was aware she was underage (17) in the US at the time. She alleges the Prince sexually abused her at Epstein's private island in the US Virgin Islands, at his mansion in Manhattan and at his former girlfriend Ghislaine Maxwell's home in London.

The ruling sets up a dramatic series of legal proceedings for Queen Elizabeth II's third child that could have major ramifications for Buckingham Palace. The long-running allegations against Andrew, 61, have already dramatically tarnished his public standing, and he stepped back from royal duties in late 2019.

Buckingham Palace declined to comment, saying, "We would not comment on what is an ongoing legal matter."
Giuffre's attorney Sigrid McCawley said the judge's ruling is "another important step in Virginia's heroic and determined pursuit of justice as a survivor of sex trafficking."

The civil suit stems from the sprawling and disturbing allegations against Epstein, the wealthy sex offender who befriended a series of powerful men despite a sketchy history.

Epstein pleaded guilty in 2008 to state prostitution charges and in July 2019 was indicted on federal sex trafficking charges. Prosecutors accused him of carrying out a decades long scheme of sexual abuse of underage girls, flying them on private planes to his properties in Florida, New York, New Mexico and the US Virgin Islands. He died by so called “suicide” in prison before he could face trial.

Maxwell, his former girlfriend and close associate, was arrested in 2020 and accused of facilitating the abuse scheme. A federal jury convicted her in December on five federal counts, including sex trafficking a minor and conspiracy.

Giuffre was not one of the four women who testified in Maxwell's trial that they had been abused. Still, she was mentioned in the trial when Carolyn, one of the victims, testified that Giuffre had recruited her to come to Epstein's home in Palm Beach, Florida. 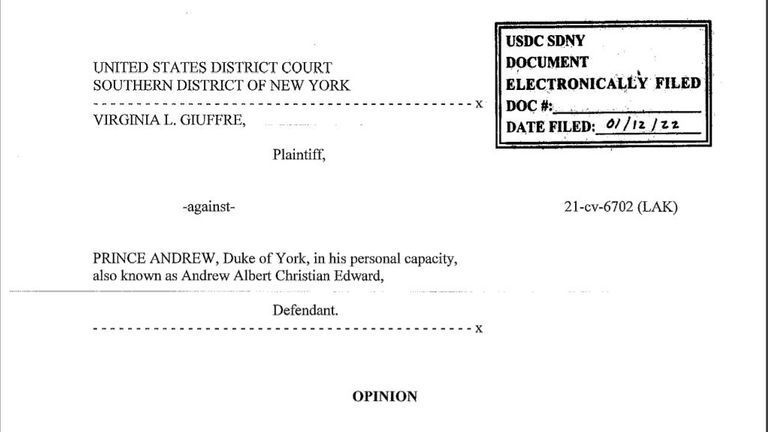