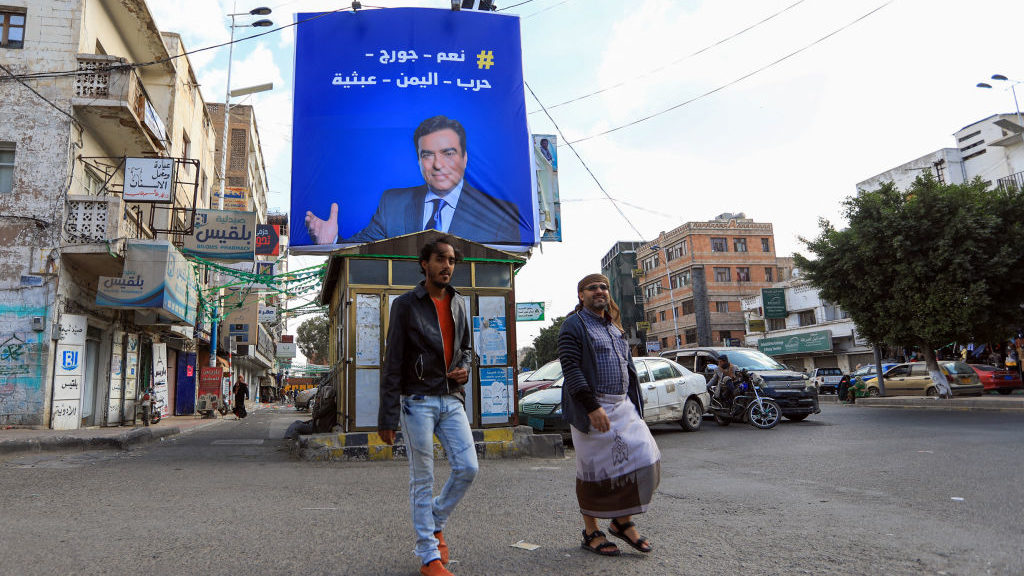 Saudi Arabia and several Gulf states recalled their envoys to Lebanon over the weekend and gave Lebanon’s ambassadors in their countries 48 hours to leave.

Lebanese Prime Minister Najib Mikati has said he “regrets” the Saudi decision and called on Riyadh to rethink its move.

The latest diplomatic spat came after Lebanon’s Information Minister George Kordahi made critical remarks about the Saudi-led military intervention in Yemen, saying the Houthis were “defending themselves … against an external aggression.” He also said that: “In my opinion, this Yemeni war is absurd and should stop.”

The interview, in which Kordahi was asked questions about several topics including normalization with Israel, was recorded back in August and aired last Monday.

Kordahi, a popular former Saudi television personality on the MBC broadcaster, was nominated to his position by the Marada Movement, a Christian party allied with Hizbullah and led by Suleiman Franjieh.

He has refused to apologize, even as both Hizbullah and Franjieh rejected demands for his dismissal. Meanwhile, the MBC Group announced on Wednesday that it plans to shut its office in Beirut “soon” and relocate to Riyadh.

The latest development risks throwing the country with an already debilitated economy on the verge of collapse into deeper distress.

Hussein Ibish, senior resident scholar at the Arab Gulf States Institute in Washington, told The Media Line that “it’s another huge blow to the country and its mainstream government institutions.”

Ibish explains that the steps taken by Saudi Arabia and other Gulf states may be counterproductive to what they want to achieve and will lead to the “isolation” of the tiny Arab country, and also “gives Hizbullah free rein in much of the country, because their opposing forces are now in many ways without the support of their most important Arab regional patrons.”

Iran and Saudi Arabia, the leading Shiite and Sunni Muslim powers in the region, have been rivals for years but they launched direct low-level negotiations this year hoping to defuse tensions.

No one knows for sure whether these steps are temporary or long-term, but Ibish says that, for Saudi Arabia, “it’s probably a self-defeating move. We’ve seen them do similar things in Lebanon and Iraq, and it doesn’t tend to solve anything.” But regardless, he says, “it’s going to be at a minimum of many months or a year, which is really devastating to Lebanon.”

Osama al-Sharif, a veteran Jordanian journalist and political commentator, told The Media Line the current Gulf crisis with Lebanon has been brewing for some time, and Kordahi’s statement was merely the spark that ignited a massive diplomatic row between Riyadh and Beirut.

“It’s a culmination of years of a widening rift with Hizbullah, and its hijacking of the Lebanese political system being at the heart of it,” he said.

Al-Sharif says this has to do with the “broader tension between Saudi Arabia and Iran,” adding that its aim is to “stop the growing influence of Hizbullah and Iran.”

Saudi King Salman phoned Bahrain’s king on Sunday to thank him for his country’s decision to stand by Saudi Arabia, and he also said that the measures taken by Kuwait to show its support reflects the solidarity of the Gulf Cooperation Council (GCC).

Fahad al Shelaimi, president of the Middle East Center for Strategic and Political Studies in Kuwait, told The Media Line that these steps are a “political” response, and that the Lebanese people are not the target, but that it is directed at the “Lebanese political and party leaders. Especially the policies pursued by Hizbullah in Lebanon and the countries of the region.”

There is a feeling within GCC countries that Lebanon’s political decisions are controlled by Hizbullah, and that it does not act in accordance with the Arab countries interests but deals in line with Iranian interests.

Shelaimi says what transpired in the last few days is not an exaggerated reaction to the minister’s statements, but rather the result of an accumulation over the past four years of Hizbullah taking control of government decisions, and its “behavior” toward Saudi Arabia.

He says that GCC countries may choose to escalate the conflict in various ways, including imposing a “boycott” on agricultural products and tourism.

"Lebanon needs Saudi Arabia, not the other way around"

Lebanon’s exports to Gulf countries in 2020 was in the hundreds of millions of dollaes. CNBC Arabia estimated that UAE imports from Lebanon are valued at $552.9 million, while Saudi Arabia came in second at $219 million, and Kuwait at $74.2 million, while Bahrain came in last at $14.8 million.

But stopping imports will inevitably hurt Lebanese farmers, in particular.

“The Gulf states decided either to correct the Lebanese distortion or to be boycotted, and the Iranian-backed Hizbullah bears the main responsibility,” says Shelaimi.

A Saudi official told The Media Line that steps taken by Riyadh are a “warning shot” to the Lebanese state for now.

The official, who did not want to be named, insists that “Lebanon needs Saudi Arabia, not the other way around,” adding that his country has been overly patient in its dealings with Lebanon despite the “inability” of successive governments to stop Hizbullah’s “aggressive” policy toward the kingdom.

“If Lebanon’s policy changes, the situation will change,” says the official.

Shelaimi points out that it is Saudi and Gulf countries’ investments, aid and tourism that are revitalizing the Lebanese economy, and that “Lebanon has become a burden for the Arabs by siding with Iran.”

“When Lebanese interests prevail over Hizbullah’s interests, the situation will change. I expect demonstrations in Lebanon to put pressure on the president and the government,” Shelaimi predicts.

Many Lebanese experts agree that it’s not in the best interest of their country to have a dispute with Saudi Arabia and the Gulf states.

Lebanese journalist and political writer Amine Kammourieh told The Media Line that “the story is much bigger than Minister George Kordahi’s statement.”

Saudi Arabia and other GCC states have stopped all imports from Lebanon, which accounted for hundreds of millions of dollars.

Many in Lebanon fear that more GCC and Arab countries will follow suit. The head-on clash was just a matter of time, say Arab observers, who agree that the real reason behind it is Saudi Arabia’s regional rival and nemesis, Iran.

Kammourieh stressed that “the crisis between Lebanon and Saudi Arabia began with the election of President Michel Aoun, and we saw its repercussions with the problem that occurred with Saad Hariri, and then the position of the latter’s government, and this problem was repeated with the government of Hassan Diab, and it is clear that it will continue with the government of Najib Mikati.”

Kammourieh explains that “for the Kingdom of Saudi Arabia, Lebanon should revolve around its political orbit, especially with regard to its foreign policies.”

Kammourieh continued: “It is difficult to say that things will go to complete calm even if Information Minister George Kordahi resigns, and there is a complex relationship between the ‘bigger brother and the smaller brother’ of the Arab countries and Lebanon’s relationship with Saudi Arabia in this regional context.”

Ali Al-Amin, editor-in-chief of the Lebanese news agency Janoubia and a political analyst, told The Media Line that there is a fear that the punitive steps will extend to more Gulf and Arab countries.

“These measures have a significant impact on Lebanon because it is going through a very difficult economic and financial phase,” he said. “There was a feeling with the formation of the government that it would be able to persuade the Gulf countries to obtain aid.”

Amin says the minister’s statement, was the “straw that broke the camel’s back.”

He argues that Saudi Arabia does not see any positive sign in dealing with several issues that concern the kingdom, and that the rulers in Riyadh are convinced no Lebanese government is able to “reign” in the powerful Hizbullah party.

Amin cites, as examples, Lebanon’s foreign policy and its dealings with certain Arab issues, especially Yemen and the “Houthi file.”

“[Hizbullah] turning Lebanon into training grounds for the Houthis and a platform for Houthi media broadcasting anti-Saudi agendas in addition to the involvement of Hizbullah by sending its experts to Yemen to train Houthi fighters,” he said.

Another issue Amin says was behind the Saudi decision is related to the smuggling of millions of pills of the amphetamine drug Captagon from Lebanon into the kingdom. “It appears that Lebanon has become a launching pad for drugs,” he said.

He says that the Saudis realized that there is “no longer a Saudi-Arab partnership in Lebanon.”

“The absurdity that Lebanon is experiencing in light of this existing political situation will lead it to the Iranian embrace without leaving a chance for getting out of this crisis and returning to the Arab incubator,” according to Amin.

He says that Gulf pressure may provide an opportunity if there is an “internal Lebanese desire to get out of the predicament that it’s experiencing.”

Amin insists that “there is a clear Iranian penetration into Lebanon,” adding that it is not a requirement for Lebanon to be allied with Saudi Arabia, “but what is required is for it not to be a starting point of attack against it and the Gulf states, and not to be a tool of pressure on them.”

“The crisis will add to Lebanon’s woes and may lead to the collapse of the government and drive the country toward a major conflict between various parties,” said Al-Sharif.