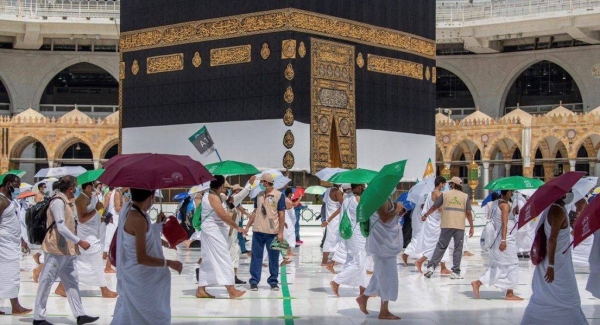 Saudi Arabia’s Ministry of Hajj and Umrah has opened registration for Hajj 1444 by pilgrims from within the Kingdom.
The ministry said the price of domestic pilgrim packages begins at SR3,984.

The ministry said applications can now be submitted by Saudis and residents wishing to perform the Hajj this year through its website and also via the Nusuk app.

The ministry has announced a total of four packages for domestic pilgrims. The first package costs from 10,596 to 11,841; the second from 8,092 to 8,458; the third costs 13,150 and the fourth package, which provides economical services to the pilgrims, costs SR3,984. All prices include value-added tax (VAT).

Pilgrims registered in the third package will be accommodated in the six towers located close to the Jamarat in Mina.

In the first package, the camps will have sophisticated facilities and convenient services for the pilgrims.

The minimum age for the application had been set at 12 years, according to requirements announced by the ministry.

Priority will be given to applicants who have not performed the Hajj in the past and in case vacant places are available, those who have previously performed Hajj will be included.

The ministry said that women’s Mahram will be excluded from the priority advantage.

The national identity (ID) or residency (iqama) must be valid until the end of Dhul Hijjah 1444 AH.

The applicant must register companions who want to perform the Hajj with him or her in one facility and in the same unified package. He shall add companions by pressing the specific buttons for the purpose during the registration procedure. The number of companions with one applicant must not exceed 13 people.

Pilgrims must commit to the chosen package and come with the Hajj facility with which they have been registered.

All applicants are also required to complete immunization with coronavirus and “seasonal influenza” vaccines, in addition to obtaining a valid vaccination certificate proving receipt of the “ACYW quadruple meningitis” vaccine, at least 10 days before arriving at the holy sites for Hajj.

The ministry stressed that contracting and providing Hajj-related services are implemented through companies and institutions licensed by the ministry to serve pilgrims from within the Kingdom and listed on the ministry’s website. It added that registration for Hajj must be done by the pilgrim himself, urging all applicants to avoid dealing with campaigns, agents or companies that are not licensed by the Ministry.

Pilgrims are required to pay the fees of the chosen package in the specified Hajj facility within the announced deadline to avoid the cancellation of registration.

A mobile number used in one registration cannot be used for another.

The ministry said pilgrims should commit to leaving Mina according to the schedule set for the chosen package.
#Coronavirus  #Vaccines  #vaccine
Add Comment