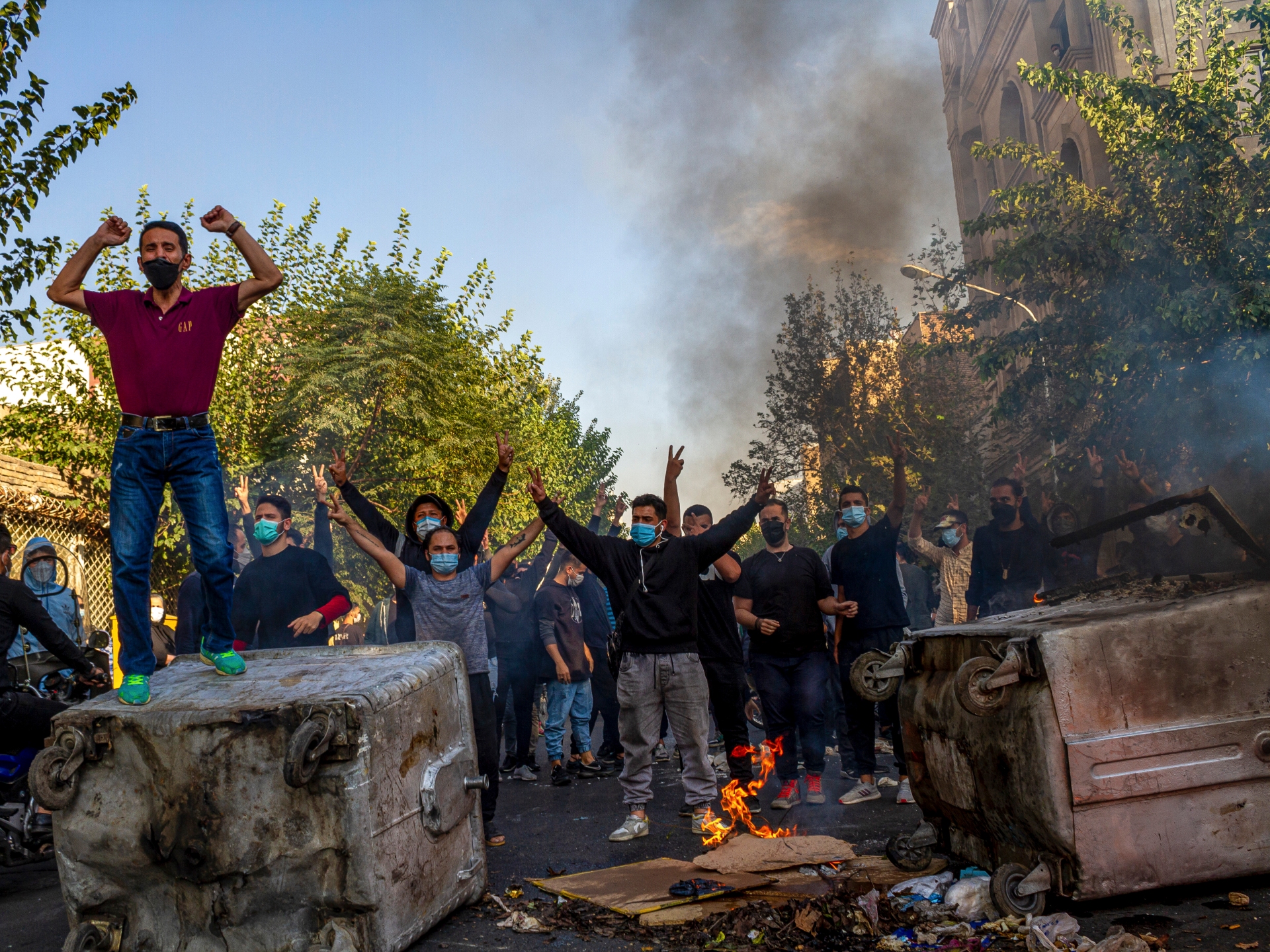 Iranian officials criticise a UN rapporteur while a large number of journalists calls for the freeing of their arrested colleagues.

Protests that began last month in Iran after the death of a young woman in police custody continue to be documented in cities across the country this week, even as the first court hearings of protesters have been held and internet restrictions remain in effect.

Videos posted on social media showed more protests at universities, especially in the capital, Tehran, and Sanandaj, the capital of the northwestern province Kurdistan, where 22-year-old Mahsa Amini was from. She died on September 16 after Iran’s morality police detained her.

The demonstrations persisted after Hossein Salami, the commander-in-chief of the Islamic Revolutionary Guard Corps, said on Saturday, “Today is the last day of the riots,” as he warned people “not to come to the streets”.

An unknown number of protesting students was suspended from universities this week, reports on social media and foreign-based outlets said. It prompted their fellow students to demonstrate on Monday in their support, according to images on social media, which could not be independently verified.

Meanwhile, a court in Tehran on Sunday held the first hearings for “rioters” accused, among other things, of intentionally killing police officers and burning public and government property. Several people are charged with “corruption on Earth” and “waging war against God”, which carry the death penalty.

The Iranian judiciary said more than 1,000 indictments have been issued for people participating in “riots” across the country after a call this month by the judiciary chief to fast-track cases and hand out harsh sentences.

Iranian media reported that one arrest was of Toomaj Salehi, a dissident rapper who had filmed himself participating in protests and regularly posted his opposition to the Iranian establishment on social media. His friends rejected reports that he was arrested in a border province while trying to flee the country. Salehi had been previously detained in September 2021 after releasing songs with lyrics decrying the establishment but was released on bail.

Amini died days after being detained by Iran’s morality police and taken to a “re-education centre” for allegedly not fully complying with the country’s mandatory dress code.

Those arrested since the start of the protests include a slew of reporters and photojournalists. More than 500 local journalists have signed a statement that calls on authorities to release their colleagues. They say the detained journalists have been denied access to lawyers and charged prior to facing public trials and official submission of evidence.

“Let’s not blind the eyes of the society,” said the statement on Sunday, which was carried on the front page of several newspapers. “Let’s free the journalists.”

Hamedi had reported on Amini’s death from a hospital in Tehran and posted an image of the woman’s parents holding each other. Mohammadi had travelled to Amini’s hometown of Saqqez to cover her funeral. The editors-in-chief of the two newspapers they work for have said the reporters were on assignment and only did their job.

Dozens of people are thought to have been killed during the protests and many more injured, but Iranian authorities have yet to release an official tally. Dozens of members of the security forces have also been killed. Several of them died this week, according to authorities, who release their names and hold state funerals for them.

Speaking with the family of a security officer killed in Tehran, President Ebrahim Raisi promised, “We will under no circumstances allow the enemy’s designs for harming our security.”

Top Iranian authorities, including Supreme Leader Ali Khamenei, have accused the United States and Israel of being behind the unrest.

Some officials have signalled that they are open to reforms as a result of the protests, provided protests are differentiated from “riots” and efforts to “overthrow the establishment”.

The persistent protests and lingering internet restrictions have put the Iranian state at odds with a number of other countries and officials.

The US and Albania are preparing to hold an informal meeting of the United Nations Security Council on Wednesday to discuss what Washington has called “brutal suppression” of the protests.

Speaking to reporters on Monday, Iranian foreign ministry spokesman Nasser Kanani criticised Javaid Rehman, the special UN rapporteur on human rights in Iran, for a “deeply anti-Iranian approach” and for agreeing to participate in the Security Council meeting, which Tehran considers to be politically motivated.

“Unfortunately, human rights have become a tool for pursuing the political goals of some countries, especially the US,” Kanani said.

On Sunday, a group of prominent women from 14 countries – including Nobel laureates Malala Yousefzai and Nadia Murad, former US Secretary of State Hillary Clinton and former US first lady Michelle Obama – published an open letter calling for Iran’s immediate expulsion from the UN Commission on the Status of Women.

German Foreign Minister Annalena Baerbock said the European Union was examining whether to classify the Revolutionary Guard as a “terrorist” organisation for its response to the protests, something the Iranian foreign ministry on Monday called “illegal”. The US already designated the elite force as a “terrorist” group in 2019.

Tehran has responded to human rights sanctions by the US, EU the United Kingdom and Canada with sanctions of its own and has said new measures on US and Canadian officials and entities would be imposed.

Iran this week blocked a host of services by Google, including its maps and Android apps store after the store flagged a major state-backed application as being unsafe because of suspicions of “spying” on users’ data. Authorities denounced Google’s move as being politically motivated.

State-affiliated media showed footage of “large numbers of students and professors” who were reported to be taking part in demonstrations denouncing a “terrorist” attack on a major Shia religious shrine in Shiraz last week. It killed 15 people and wounded dozens.

Authorities organised rallies in the southern city and elsewhere to denounce the attack. Top Iranian officials have linked the attack to “riots” and pledged to take revenge as a website linked with ISIL (ISIS) claimed responsibility.