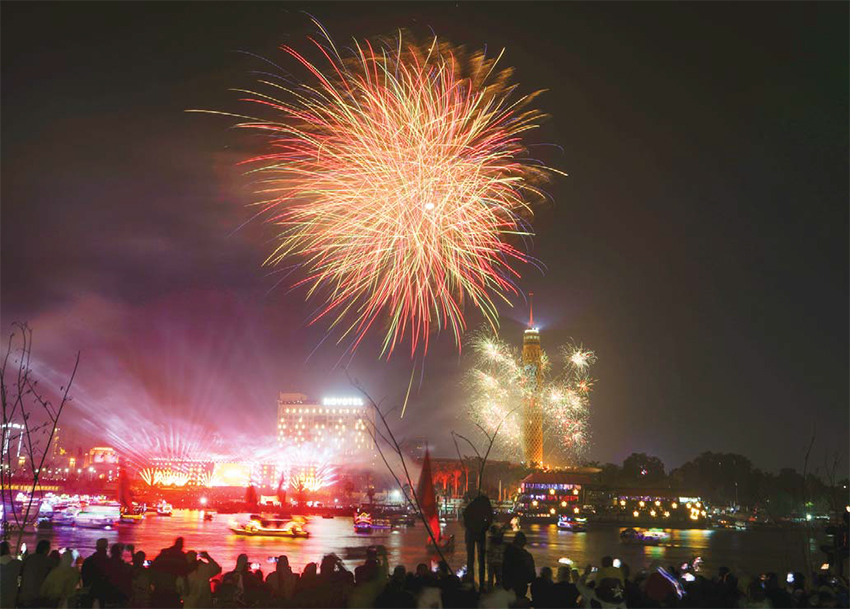 His Highness the Amir Sheikh Nawaf Al-Ahmad Al-Jaber Al-Sabah shared Saturday congratulatory cables with the leaders of the Arab and friendly countries on the New Year. His Highness the Amir wished further security, peace, stability and prosperity to all countries all over the world in this New Year, and well-being to their leaders.
Revelers in major city centers across Europe and the Middle East were ushering in 2023 with countdowns and fireworks, as many cities around the globe celebrated New Year’s Eve without restrictions for the first time since the start of the coronavirus pandemic. Children crowded a metro station in Kharkiv, Ukraine, to meet with St. Nicholas and enjoy a special performance ahead of the new year.

Meanwhile, some soldiers who said they usually celebrate the holiday with family decided to stay in the trenches as they sought to defend their country. Others in Ukraine returned to the capital, Kyiv, to spend New Year’s Eve with their loved ones. As Russian attacks continue to target power supplies, leaving millions without electricity, no big celebrations were planned. A curfew was to be in place as the clock struck midnight. French President Emmanuel Macron delivered “a message of unity and trust” in a televised address Saturday. Referencing the war in Ukraine several times, Macron also sent a message to France’s “Ukrainian friends,” saying “we respect and admire you.”

“During the coming year, we will be unfailingly at your side. We will help you until victory and we will be together to build a just and lasting peace. Count on France and count on Europe,” he said. Turkey’s most populous city, Istanbul, was bringing in 2023 with street festivities and fireworks. At St. Antuan Catholic Church on Istanbul’s popular pedestrian thoroughfare Istiklal Avenue, dozens of Christians prayed for the new year and marked former Pope Benedict XVI’s passing. T

he Vatican announced Benedict died Saturday at age 95. The Pacific nation of Kiribati was the first country to greet the new year, with the clock ticking into 2023 one hour ahead of neighbors including New Zealand. In Auckland, large crowds gathered below the Sky Tower, where a 10-second countdown to midnight preceded fireworks. The celebrations in New Zealand’s largest city were well-received after COVID-19 forced them to be canceled a year ago.

There was a scare in the North Island coastal city of Tauranga, about 225 kilometers (140 miles) from Auckland, when a bouncing castle was blown 100 meters (yards). Tauranga City Council reported one person was hospitalized and four people were treated on site. Over 1 million people crowded along Sydney’s waterfront for a multi-million dollar celebration based around the themes of diversity and inclusion. More than 7,000 fireworks were launched from the top of the Sydney Harbour Bridge and a further 2,000 from the nearby Opera House.

It was the “party Sydney deserves,” the city’s producer of major events and festivals Stephen Gilby told The Sydney Morning Herald. “We have had a couple of fairly difficult years; we’re absolutely delighted this year to be able to welcome people back to the foreshores of Sydney Harbor for Sydney’s worldfamous New Year’s Eve celebrations,” he said. In Melbourne, Australia’s second largest city, a family-friendly fireworks display along the Yarra River as dusk fell preceded a second session at midnight. Authorities in military-ruled Myanmar announced a suspension of its normal four-hour curfew in the country’s three biggest cities so residents could celebrate New Year’s Eve. However, opponents of army rule urged people to avoid public gatherings, fearing that security forces might stage a bombing or other attack and blame it on them.
#Coronavirus  #COVID-19  #Covid
Add Comment