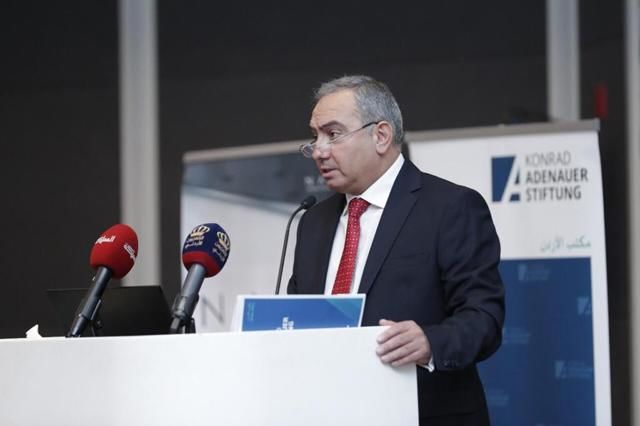 The US and Saudi Arabia are the two most important allies to Jordan, concluded a Jordanian public opinion survey carried out by NAMA Strategic Intelligence Solutions, in cooperation with Konrad Adenauer Stiftung (KAS) Jordan.
The results of the third edition of the Foreign Relations Survey were released in an event on Monday by representatives from NAMA and KAS.

NAMA’s long-term research projects aim to explore Jordanians’ perceptions of the country’s foreign relations, as well as to understand the relationship between Jordan’s public opinion priorities and its foreign relations with active countries in the region, according to a statement from NAMA.

NAMA Chairman Fares Braizat presented the survey results, noting that the poll was carried out on a systematic-random, multistage-cluster probability sample that represented all segments of society.

The survey consisted of 1,232 face-to-face interviews in different areas in the Kingdom.

Braizat revealed that Jordanians placed the US (49 per cent) and Saudi Arabia (23 per cent), as the first and second largest economic supporters of Jordan and the Kingdom’s closest allies. This reflects the results of the 2018, 2019 and 2021 surveys, he added.

He noted that the importance of this study lies in “providing some data to the decision makers and planners of the foreign policy, as it represents Jordanian society, and the community should have an opinion on what happens around them”.

According to the survey, Jordanian public opinion attributes importance to the Kingdom’s relations with the US and Saudi Arabia.

The survey shows that more than two-thirds of Jordanians describe political relations with the US as “very good”, followed by Saudi Arabia and Egypt (55 per cent) and then the UK (54 per cent).

The survey also shows that 35 per cent of those surveyed believe that Saudi Arabia is the Arab country with which Jordan shares the majority of foreign policy interests.

The poll also shows that 65 per cent of the surveyed believe the US is the first among the non-Arab countries with which Jordan shares foreign policy interests.

Braizat highlighted that most Jordanians prefer to “strengthen relations” with the US, Egypt, Saudi Arabia, the UAE, Syria and more countries.

The percentage of those who would like to limit relations with Israel has increased from 70 per cent in 2019 to 74 per cent in 2021, he noted.

The survey also shows consistency in the percentage of Jordanians who want Jordan to play a “larger role” in the region in general, while the percentage of those who want Israel to have “no role at all” has increased from 57 per cent to 61 percent.

“Jordan’s success in avoiding crises in the region could have been among the many reasons that encouraged Jordanians to demonstrate support for the country to play a much larger role than is the case right now,” Braizat noted.

Despite the view of the US as a major economic supporter and important ally, the percentage of Jordanians who indicated they are dissatisfied with the way the US deals with the Arab-Israeli conflict is very high, as the percentage of those who say “very unsatisfied” reached 83 per cent.

Around 42 per cent of Jordanians believe that the US will be the non-Arab country with the strongest regional influence in the next 10 years, which is the same percentage in 2019.

The percentage of those who believe that China is the country that will have the strongest regional influence increased to 13 per cent, compared with 8 per cent in 2019.

Nasser Judeh, former foreign minister, mentioned that the geographical location of the Kingdom has dictated its foreign policy, which is based on open communication with everyone, and the search for partnerships, not alliances.

“As 70 per cent of the Jordanian population is youth, we should consider their opinion and the economic challenges they go through, especially after the pandemic, and our foreign policy is not far from that,” Judeh said.

Judeh noted that Jordan is always keen on enhancing strategic relations with multiple countries such as Saudi Arabia, Iraq, Syria and Palestine.

“Good relations with a country does not mean a difference of opinion on a number of regional issues,” he added.
Add Comment