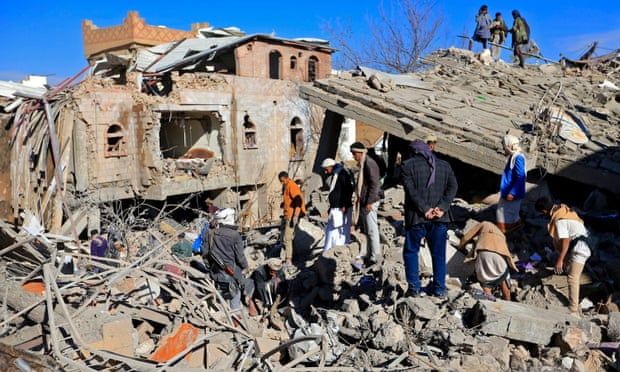 Houthi forces who control much of northern Yemen say about 20 people have died in Saudi-led coalition airstrikes on the capital, Sana’a, a day after a Houthi drone attack killed three people in the United Arab Emirates, Saudi Arabia’s coalition partner.

Neighbours and doctors said about 14 people were killed when coalition planes struck the home of a high-ranking Houthi military official, including his wife and son. A Houthi official tweeted that in all, about 20 people had died.

Early on Tuesday, the coalition said it had begun strikes against strongholds and camps in Sana’a belonging to the Houthi group.

Global leaders have rallied around the UAE since the drone attack, which killed three migrant workers and wounded six others. Emirati officials said they were weighing a response to what they labelled a “sinister criminal escalation”, as satellite images were published revealing damage to an oil plant in Abu Dhabi. 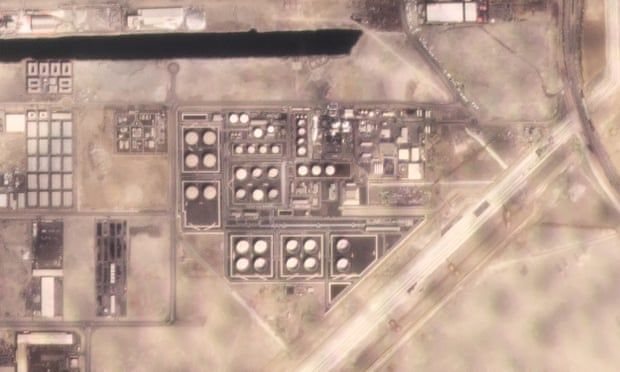 A satellite image, provided by Planet Labs PBC, shows what is thought to be white fire-suppressing foam after an attack on an Abu Dhabi National Oil company fuel depot.

Houthi officials earlier said they had used two drones and several cruise missiles in an unprecedented strike at the Emirati capital, which drew condemnation from Arab states, Washington, London, and the UN.

Liz Truss, the UK foreign secretary, said on Twitter: “I condemn in the strongest terms the Houthi-claimed terrorist attacks on the United Arab Emirates,” while the US secretary of State, Antony Blinken, and the White House national security adviser, Jake Sullivan, also denounced the attacks and promised to coordinate a response with Emirati officials.

Photographs of the attack sites showed scorch marks near several oil storage tankers and white streaks that were thought to be firefighting foam. A second site, at nearby Abu Dhabi international airport, was also shown, although damage there was reported to have been slight.

In the Middle East, reactions ranged from surprise and indignation to justification for the strike at the heart of the Emirati capital. The attack came at a critical juncture in regional talks between Saudi Arabia and Iran, as well as talks in Vienna, where Iranian officials are due to meet their US counterparts in an attempt to recommit to the nuclear deal.

The Houthis are heavily backed by Iran and are seen as one of the proxy forces for the Iranian revolutionary guards. Another Iranian proxy in Iraq, Kata’ib Hezbollah, praised the attack, with its leader, Abu Ali al-Askari, saying: “God was able to strike fear in the hearts of Bin Zayeds by the hands of the mujahideen and brave people of Yemen.”

Before Monday’s strike, several pro-militia groups in Iraq had posted social media images purporting to show Dubai’s Burj Khalifa tower being struck by missiles fired from drones, a response to what it said was UAE meddling in Iraqi affairs.

The messages have been perceived in the Emirates as a coordinated effort by Iran to destabilise UAE. In recent weeks, a UAE-backed ground force has repelled Houthi advances near the government stronghold of Marib in Yemen, where Abu Dhabi has significantly scaled back its own troops but retains substantial influence over proxies. 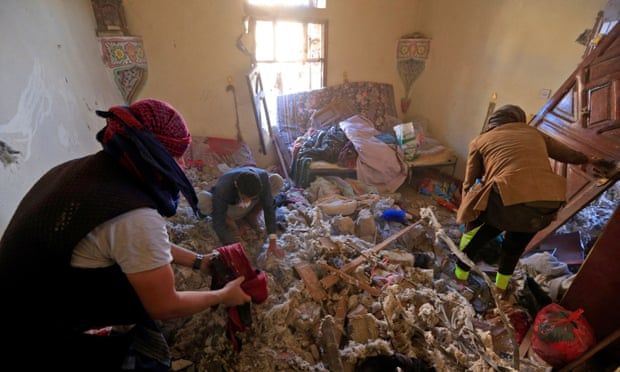 A family looks for their possessions after the attack on Sana’a on 18 January.

The Houthis had been intending to take the town of Shabwa, which would have given them proximity to gas and oilfields. However, an Emirati-led force, the Giants Brigades, was moved from the Red Sea to counter them.

The war in Yemen, after years of destruction, dislocation and, more recently, stalemate, has become the most potent proxy arena in the region. Saudi troops and its air force remain dominant players in the conflict. On the Houthi side, Hezbollah plays a significant role, with its senior members known to have trained local forces in Yemen and to have helped import weapons from Iran.

The UN Secretary General, Antonio Guterres, on Tuesday “expressed his concern and deplored the recent Saudi-led Coalition’s airstrikes in Sana’a that resulted in numerous civilian casualties,” his office said, adding that he called on all sides to return to the negotiating table.

In government circles in Iraq, where several rounds of talks between Iran and Saudi Arabia had been held in the past year, conjecture about the attacks in the UAE was swirling on Tuesday. “They are like the scorpion and the frog,” one Iraqi insider said of Iran. “Why would they do this now?”

Late last year, the head of Emirati intelligence, Tahnoon bin Zayed, visited Iran to try to establish trade ties, after years of boycotting Tehran. “Do they want to embarrass him?” the insider asked. “This will have consequences.”