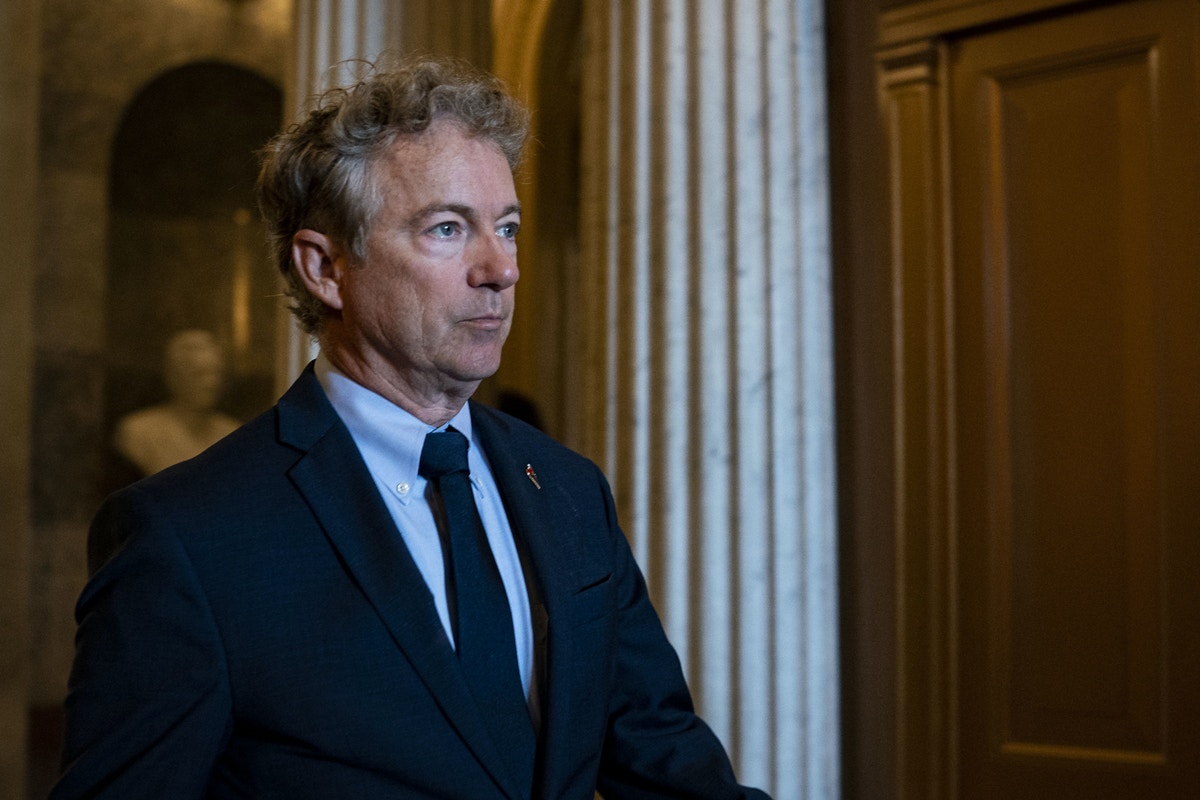 The Republican senator aims to file a motion banning the Biden administration’s first major missile sale to Saudi Arabia. Democrats are hesitant to join him.
Sen. Rand Paul, R-Ky., told The Intercept on Tuesday that he will most likely force a floor vote on the Biden White House’s first major arms sale to Saudi Arabia and is seeking out Democrats to co-sponsor a resolution.

The vote would test senators’ positions on a $650 million export of 280 Raytheon-built Advanced Medium-Range Air-to-Air Missiles, or AMRAAMs, and 596 missile launchers. The Pentagon notified Congress on November 4 that the State Department had approved the sale, giving lawmakers 30 days to issue a ban.

Paul said he spoke directly with fellow arms sale skeptic Sen. Chris Murphy, D-Conn., about the deal on Tuesday. He told Murphy that he’s “very interested” and “in all likelihood” will file a privileged motion to stop the export — guaranteeing an immediate floor vote on a resolution of disapproval. The move would follow a joint resolution Rep. Ilhan Omar, D-Minn., introduced last week to block the sale. (Unlike in the case of Paul’s Senate motion, House rules do not assure her resolution gets an expedited vote.)

Murphy told The Intercept that he has not yet made a decision on whether to back Paul’s motion. “My position generally has been to support truly defensive weapons sales to the Saudis, while opposing sales that could be used in offensive operations, particularly in Yemen,” he said.

Sen. Bernie Sanders, I-Vt., another frequent weapons export skeptic, also told The Intercept he’s undecided, saying he has to look at the details of what Paul is preparing. “But I’m not unsympathetic to that,” he added. (After publication, a source from Sanders’s office told The Intercept that the senator had decided to co-sponsor Paul’s motion.)

The State Department justified the sale by arguing that the AMRAAMs help Saudi Arabia to defend against cross-border rocket attacks launched by Houthi militants in Yemen, noting the missiles strike aerial and not ground targets. The Houthis are a Shia movement that pushed the Saudi-backed Yemen government out of power in 2014 and have been engaged in a civil war ever since. Last week, they breached the U.S. embassy in the Yemeni capital of Sanaa and detained Yemeni employees of the U.S. government, prompting condemnation from the leadership of the Senate Foreign Relations Committee and the House Foreign Affairs Committee.

But the line between defense and offense can be a murky one. In a petition calling on senators to force a vote on the arms sale, activist group Just Foreign Policy argued that AMRAAMs can bolster Saudi Arabia’s blockade of Yemen’s airport. The blockade is a main contributor to what the United Nations has said could be the worst famine in a century.

At least one powerful Democrat in Congress, House Armed Services Committee Chair Adam Smith, D-Wash., agreed with the White House’s justification for the sale and expressed skepticism of the blockade’s critics. In an interview with The Intercept on Tuesday, Smith referred to the AMRAAM as a “defensive weapon” and insisted the U.S. has already cut off offensive support.

When asked about the Saudi blockade on Yemen’s ports, he argued, “Actually, it’s not a formal blockade. It is vastly more complicated than that” — a stance at odds with his Democratic colleagues who in May urged the Biden administration “to compel Saudi Arabia to end its callous blockade of Yemen.” Led by Sen. Elizabeth Warren, D-Mass., the 16 senators disputed a position similar to Smith’s, telling Biden: “While your Administration maintains that ‘[this] is not a blockade,’ Saudi action is undoubtedly preventing much needed fuel from reaching those in need and is exacerbating an already grave humanitarian crisis.”

If Paul proceeds with the privileged motion to prohibit the sale, a vote on the Senate floor would occur within the next few weeks, just as Democrats are set to finalize their Build Back Better Act — and at a particularly sensitive time for the U.S. relationship with Saudi Arabia.

As The Intercept reported last week, the rise in gas prices — a major driver of inflation today — is a result of Saudi Crown Prince Mohammed bin Salman enacting revenge on Biden for not embracing the oil kingdom as his predecessor Donald Trump did. The heir to the Saudi throne has refused Biden’s request for OPEC to increase oil production to help lower prices.

The vote on the AMRAAM sale would also arrive as Democrats are slated to negotiate the U.S. position on the Saudi war on Yemen in their inaugural defense authorization bill since they gained control of the House, Senate, and White House for the first time in a decade. The bill is an annual must-pass legislation dictating military policy.

Lawmakers tried to cease U.S. participation in the war by invoking the 1973 War Powers Resolution in late 2018 and passing an amendment to the Fiscal Year 2020 National Defense Authorization Act — both of which failed under Republican leadership. This year, Rep. Ro Khanna, D-Calif., a member of the House Armed Services Committee who co-sponsored Omar’s joint resolution last week, revitalized the amendment, which passed the House in September. But it didn’t get as many votes as an alternative reform provision offered by Meeks, which contains loopholes that could allow U.S. support for the war to continue.

Now, all eyes are on the Senate, which is slated to vote on its version of the defense authorization bill this week. Sanders in September offered a companion amendment to Khanna’s proposal, which would effectively ground all Saudi warplanes by banning U.S. logistical support, lifting the crushing blockade on Yemen’s ports.

Asked if he would support the amendment, Murphy argued Biden has already withdrawn from cooperative arrangements with the Saudis and the U.S. no longer provides fuel, targeting assistance, or intelligence. However, as Vox reported in April, American contractors still offer logistical assistance to Saudi warplanes that allows the oil kingdom to maintain the blockade on Yemen’s ports. Murphy acknowledged that the end of the blockade is the “only prospect to get political talks moving and [the Saudis’ reluctance] to do so is troubling.”

Whether Khanna and Sanders’s provision makes it into the final defense bill will largely depend on the advocacy of the lead conference negotiators, Smith and Senate Armed Services Committee Chair Jack Reed, D-R.I.

While Reed has yet to cast votes on the Senate’s version, Smith’s preference for the Khanna or Meeks amendment remains unclear. Smith co-sponsored both of his colleagues’ bills, and while he has the power to push for a provision’s inclusion in the final bill regardless of the Senate position, he told The Intercept he couldn’t say whether at least one would be in the final bill until the Senate holds its votes this week.

Still, he appeared sympathetic to concerns about Saudi defense against militants in Yemen, noting, “the Houthis are driving it as much as anybody right now.”

The sentiment diverges from House activists like Omar, who emphasized the Saudi role in the crisis when she introduced her resolution to ban the AMRAAM sale last week. “It is simply unconscionable to sell weapons to Saudi Arabia while they continue to slaughter innocent people and starve millions in Yemen, kill and torture dissidents, and support modern-day slavery,” she said.
#donald trump
Add Comment