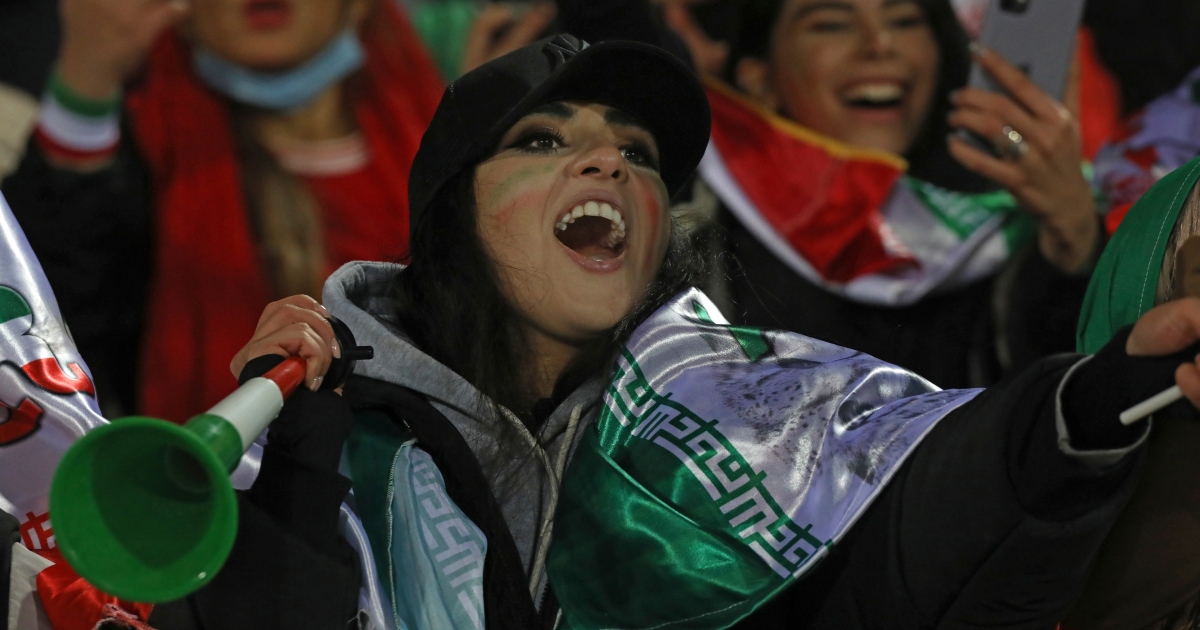 Iran has allowed a limited number of women to watch a football match against Iraq in Tehran that secured its entry into the 2022 Qatar World Cup.

Approximately 2,000 women were present at the Azadi stadium, along with five times as many men, to watch Iran win the match 1-0, with the single goal coming from one of its star strikers, Mehdi Taremi.

“Even as there were special circumstances before the match, as you know, I’m glad that we managed to make people happy by making it into the World Cup,” Taremi told state television after the match.

The special circumstances he was referring to included the perennial issue of allowing women spectators into stadiums, patchy ticket sales, and COVID-19 outbreaks, issues that ensured the game was not short on controversy.

The confusion persisted until within hours of the match, when a website was launched to sell tickets, but faced problems.

Many fans – men and women, including Iraqis – some of whom had travelled to Tehran from other cities, complained that they were unable to buy tickets. State television showed groups of fans gathering by the stadium entrances.

It remained unclear exactly how many men and women were ultimately allowed into the stadium, but officials claimed 10,000 tickets were sold, one-fifth of which were allocated to women.

Having received at least two doses of a COVID-19 vaccine was the condition of being admitted into the stadium.

Earlier in January, Shahaboddin Azizi Khadem, who heads Iran’s football federation, had announced FIFA chief Gianni Infantino was slated to visit Tehran for the match, and also have his first meeting with President Ebrahim Raisi.

But government spokesman Ali Bahadori Jahromi announced on Tuesday that no meeting with Raisi has been scheduled. There was no sign of Infantino on Wednesday and FIFA did not respond to multiple Al Jazeera requests for comments.

Infantino had in 2018 met Raisi’s predecessor, President Hassan Rouhani, who had promised him gradual reforms. Iranian women have since been allowed into stadium on several limited occasions, but officials still ban them from most matches.

Stadiums have been off limits to women since shortly after the country’s 1979 Islamic revolution, as officials and Muslim leaders claim the ban is to safeguard women against men’s profanity.

During Wednesday’s match, women were seated at a section prepared for them separated from the men. They entered and exited the stadium via a separate gate and had a women-only emergency crew set up to respond to potential incidents.

The Iran-Iraq match was dogged by coronavirus outbreaks among both camps and scheduling issues as well.

Eight Iraqi players ended up having positive tests and missed the important match, which led the Iraqi football federation to officially complain to the Asian Football Confederation (AFC) on Thursday about the results of the tests.

Azmoun – who earlier this week signed with Germany’s Bayer Leverkusen – could not even travel to Tehran after his club, Russia’s FC Zenit, did not allow him. This prompted the Iranian football federation to send an official complaint to FIFA, but Zenit said Iran sent its invitation for Azmoun too late and he was not fit for travelling.

Taremi, who scored the only goal during Thursday’s match, almost did not make it to the match as he, too, was stranded in Turkey by a storm. A private flight ultimately took him back to Tehran from Antalya.