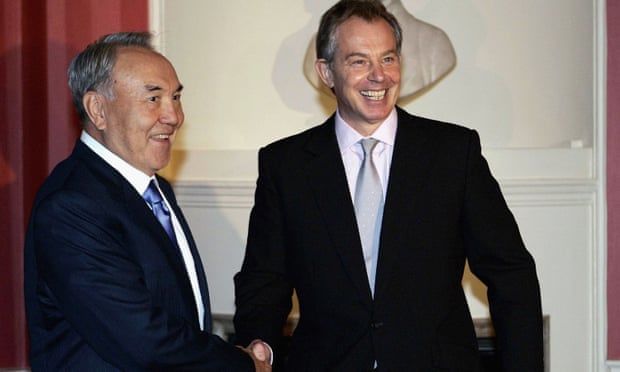 The people have spoken: Labour should cut its ties with Tony Blair

As prime minister he made a virtue of alienating his grassroots. This unleashed the political forces that consumed him, says Guardian columnist Owen Jones
Sir Tony Blair is a striking case study of how elite opinion and popular common sense collide. In media and political circles, Blair is a respected statesman: when he speaks, agree or not, you listen. His passionate detractors are essentially treated as cranks suffering from an acute case of Blair Derangement Syndrome: an unholy alliance of rightwingers enraged by three consecutive Tory defeats and leftwingers still bitterly resentful about their exile during the New Labour era.

Yet among the electorate, sympathy for Blair belongs to the fringe. According to a new YouGov survey, just 14% approve of his knighthood – fewer than believe the moon landings were faked – and only 3% strongly so, while 63% disapprove, 41% strongly so. A decisive 56% of Labour voters disapprove, two and a half times more than approve. Meanwhile, almost a million people have signed a petition demanding the knighthood be rescinded.

How Blair went from a prime minister with a 93% approval rating in 1997 to one of Britain’s most loathed public figures – including among his own political tribe – offers invaluable lessons for Labour’s future. There has been no shortage of attempts to rehabilitate him. His frequent public utterances are accompanied by deferential, soft-soap interviews, and Keir Starmer is surrounded by aides (including close associates of Peter Mandelson) who regard recovering Blair’s reputation as a political and moral imperative.

The most obvious lesson is, of course, is: don’t launch a bloody war of aggression in conjunction with a hard-right US administration. Blair’s former defence secretary, Geoff Hoon, this week claimed he was asked to burn a memo from the attorney general questioning the Iraq war’s legality; for many of us, former UN secretary general Kofi Annan’s conclusion that it was illegal was already sufficient. Merely mentioning the Iraq war often sets off a cascade of eyerolls, of oh-so-bored retorts of “Move on!” and “Still going on about that, are we?”. Such sentiments, alas, are firmly placed in the long, tawdry tradition of the west’s contempt for brown and black victims of its foreign horrors: if hundreds of thousands of white westerners had so recently been slaughtered, their lives would not be so impatiently dismissed.

As protesters courageously battle Kazakhstan’s dictatorship, Blair’s later CV warrants more than a cursory glance. Nursultan Nazarbayev is one of many despots Blair’s foundations have taken millions from: more gruesomely, our former prime minister offered his regime PR advice after it massacred 15 civilian protesters. Now, most of the public are not aware of the finer details of Blair’s association with various tyrannies – including receiving millions from the Saudi regime, which he shielded from a corruption inquiry when he was in No 10. What has cut through is a sense that Blair genuflects before wealth and power while lacking any apparent moral compass.

But it’s a mistake to conclude that Blair’s toxicity relies entirely on foreign horrors. Margaret Thatcher is adored by her own tribe because she transformed Britain in accordance with its most radically held, and long-suppressed wishes. The Tories before her, she declared, had “merely pitched camp in the long march to the left” by accepting the postwar consensus of public ownership, the welfare state and public spending. Those she delighted in facing down – from the trade unions to the municipal left – were the bogeymen of her grassroots, rather than her own kind. Blair mirrored the Tory predecessors Thatcher scolded – “I always thought my job was to build on some of the things she had done rather than reverse them,” he said, on Thatcher’s death – and delighted in confronting elements of Labour’s own coalition. When he assailed the “forces of conservatism”, he included trade unions. While Thatcher’s zeal for privatisation went with the grain of her grassroots, Blair’s own passionate advocacy for expanding the role of the private sector in public services – not least in the NHS, Labour’s most treasured institution – did the opposite.

Blair’s reputational downfall cannot be understood without examining his record on immigration either. Under New Labour, immigration did rise sharply, yet without the government making a political argument for it. Meanwhile, a growing housing crisis, caused by the failure to build, and a squeeze on living standards that predated the 2007-8 financial crash – the income of the bottom half flatlined after 2004 while for the bottom third it actually fell – created ample fodder for those seeking to scapegoat migrants. Without Labour offering a counternarrative, or indeed viable solutions to these grievances, anti-migrant sentiment overwhelmed British politics, culminating in Brexit. This issue, too, toxified New Labour, and Blair with it.

And here’s the tragedy: Labour did have proud achievements in this period: from the minimum wage to tax credits, from gay rights to public investment (albeit undermined by creeping privatisation), from lifting millions of children and pensioners out of poverty to reducing homelessness. Yet this record was lethally undermined in three ways. First, Blair sought not to emphasise these wins, instead glorifying, say, public-sector reform (code for marketisation), which alienated his own side. Second, these transformative policies relied on an unsustainable financial bubble that inevitably popped. Third, Blair not only failed to defend his own government from the Tories’ post-crash deceit that Labour overspending caused economic calamity, he furthered it – castigating his party for failing on deficit reduction after 2005 and cautioning against blanket opposition to George Osborne’s slash-and-burn economics. That allowed the mainstreaming of the lie that the government Blair himself headed was unsustainably profligate.

Thatcher forged a new political consensus that she forced her opponents to accept; hence her proclamation that New Labour was her greatest achievement. Blairism did no such thing. Its greatest achievement, public investment, was not only swept away after defeat, it was positively demonised. Its other pillar – an inconsistent social liberalism, which included gay rights but which was undermined by often cartoonishly authoritarian home secretaries – has utterly crumbled.

So what lessons for Labour today? That relentlessly confronting the interests and values of your own tribe is both politically avoidable and ultimately self-defeating. That relegating progressive values isn’t the strategic genius it might seem to be. And that failing to address growing social and economic insecurities will unleash political forces that will consume you.

Blair’s own hubristic belief in his own political genius blinded him to these truths. It’s too late for him: it’s not too late for Labour.
Add Comment