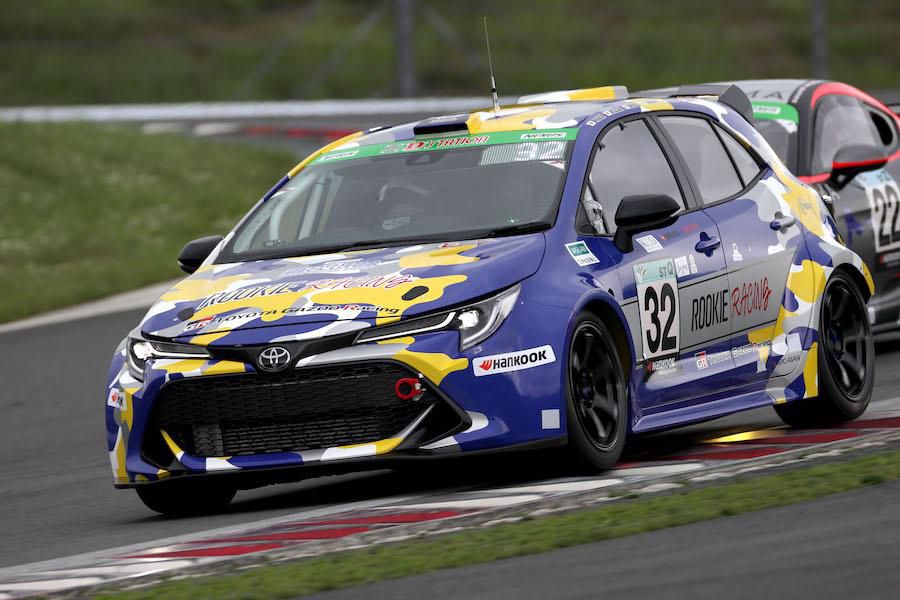 The one-off Corolla race car, which burns compressed hydrogen to power its turbocharged 1.6-liter engine, completed a total of 358 laps, a lap count which translated to less than half that completed by the race-winning Nissan GT-R.
Toyota, which up until now, has resisted the industry trend to introduce electric cars, is now touting hydrogen-engined cars.

The reason? Toyota wants to use motorsport to promote hydrogen as a viable alternative to electric cars.

Toyota has only just launched its second-generation hydrogen fuel-cell powered Mirai sedan, but this is the first time the company has raced a car powered by hydrogen.

At this stage, it is probably a good idea to quickly explain that the Mirai’s powertrain and that of the Corolla race car are very different.

The Mirai generates electricity to power its motors from a chemical reaction between hydrogen and oxygen where as hydrogen engined vehicles, are like conventional engined cars except that they burn hydrogen in place of gasoline.

The Rookie Racing Corolla Sport which burns compressed hydrogen to power its turbocharged 1.6-liter inline 3-cylinder engine completed a total of 358 laps at an average speed of 67 km/h, a lap count which translated to less than half that completed by the race-winning Nissan GT-R.

Toyota believes that electric cars will proliferate and gain public acceptance over time as prices come down and infrastructure improves, but it sees issues with battery production capacity and the difficulty in sourcing sufficient materials needed to produce enough batteries for the growing number of EVs.

Having introduced the world’s first-ever hybrid car back in 1997, Toyota believes that hybrids offer a better bridge than EVs between internal combustions vehicles and hydrogen fuel-cell vehicles.

In explaining its reasoning behind the firm’s slow take-up on electric cars, a company spokesman in 2019 mentioned that Toyota is able to produce enough batteries for 28,000 electric cars each year, or enough for 1.5 million hybrid cars. One other important factor is emissions. Toyota says that selling 1.5 million hybrid cars reduces carbon emissions by a third more than selling 28,000 electric cars. So, put simply, its carbon footprint is smaller if it sells many more gasoline-electric hybrid vehicles.

But just how efficient is a hydrogen-engined race car? After hearing the figures, I have more questions than answers.

In the Fuji 24 Hour race, Toyota Rookie Racing’s Corolla Sport actually only spent 12 hours competing on the track. It had to pit 35 times to replenish its hydrogen tanks, a process which on average took around seven minutes, translating to a grand total of 4 hours refueling.

And for logistical and safety reasons, given that the hydrogen refueling trucks are so large, a process that took place in a corner of the paddock at Fuji Speedway.

The Corolla also lost extra time for mechanical and maintenance issues which meant that the car could only compete for half the race.

But Toyota CEO, Akio Toyoda was happy to explain the company’s reasoning for their rare hydrogen excursion. “Since it’s powered by hydrogen it emits almost no CO2,” he says.

“We wanted to show the world one way Japan can be carbon neutral. And how we can benefit from a hydrogen powered society.

Since we made this statement, I, as the chairman of the Japan Automobile Manufacturers Association, have been asking the Japanese government to take the necessary steps and increase the number of carbon-neutral options. This is because, if all cars become battery-electric, one million jobs will be lost in Japan.

Hydrogen combustion actually has advantages in that it could help save jobs in the transition between today’s economy and tomorrow’s future technologies down the road.

By using a hydrogen-powered engine you don’t have the extra expense of developing the electric motor or hi-tech batteries.

Thus it’s a simple clean solution to a complicated problem. And hydrogen-engined cars are expected to be cheaper than current hybrids.

Of course, one of the biggest issues with hydrogen powered cars is the refueling infrastructure. Hydrogen is expensive and the refueling stations require significant investment. Meanwhile, you still have the expensive onboard hydrogen storage tanks which require hi-tech carbon-fiber wound technology to maximize the safety aspects. And after all, when it comes to hydrogen being marketed on a huge scale to power tomorrow’s society, the public will need to be convinced of the safety aspects of dealing with and managing hydrogen storage, transport and propulsion.

So from what we’ve seen with the Mirai fuel-cell car and the hydrogen-engined Corolla, hydrogen does have definite future applications. But if it can only run for 12 hours of a 24-hour race and require four hours in the pits to refuel, then I’m afraid I can’t see it having many motorsport options.
Add Comment