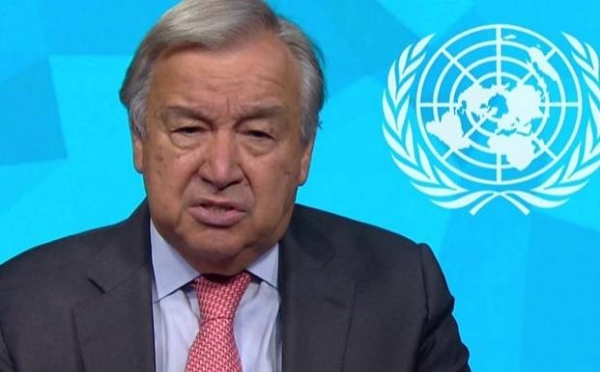 The United Nations issued a flash appeal on Tuesday for $160 million to help Pakistan cope with catastrophic floods that have killed at least 1,136 people, destroyed infrastructure and crops, and affected 33 million people, Reuters reported.
Early estimates put the damage from the floods at more than $10 billion, the government has said.

Torrential rain has triggered flash floods that have crashed down from northern mountains, destroying buildings and bridges, and washing away roads and crops.

Huge volumes of water are pouring into the Indus river, which flows down the middle of the country from its northern peaks to southern plains, bringing flooding along its length.

Guterres appealed for a speedy response to Pakistan's request to the international community for help.

"Pakistan is awash in suffering," Guterres said in a video message for the launch of the appeal in Islamabad and Geneva.

"The Pakistani people are facing a monsoon on steroids — the relentless impact of epochal levels of rain and flooding. Let us all step up in solidarity and support the people of Pakistan in their hour of need."

The UN chief blamed "the relentless impact of epochal levels of rain and flooding".

"Let's stop sleepwalking towards the destruction of our planet by climate change," he said.

Guterres said the scale of needs, with millions of people forced from their homes, schools and health facilities destroyed and livelihoods shattered by the climate catastrophe, required the world's collective and prioritized attention.

Pakistan's foreign minister, Bilawal Bhutto-Zardari, said hundreds of thousands of women, children and men were living out under the sky without access to food, clean water, shelter and basic healthcare.

"We urgently need shelter and tents, and mosquito nets," he said, adding that Pakistan would also need help with rehabilitation and reconstruction of the flood-hit areas.

General Akhtar Nawaz, chief of the national disaster agency, said at least 72 of Pakistan's 160 districts had been declared calamity hit.

More than two million acres of agriculture land were flooded, he said.

"The situation is likely to deteriorate even further as heavy rains continue over areas already inundated by more than two months of storms and flooding," he said.

Estimates suggest the floods have caused at least $10bn (£8.5bn) of damage, and many people face serious food shortages. The country was already suffering from an economic crisis.

"Things are so expensive because of this flood that we can't buy anything," Zahida Bibi, a shopper at a market in Lahore, told AFP news agency.

Officials estimate that more than 33 million Pakistanis — one in seven people — have been affected by the flooding. The situation is most severe in provinces like Sindh and Balochistan but mountainous regions in Khyber Pakhtunkhwa have also been badly hit.

Thousands of people have been ordered to evacuate villages cut off in northern Swat Valley where bridges and roads have been swept away - but even with the help of helicopters, authorities are still struggling to reach those trapped.

"Village after village has been wiped out. Millions of houses have been destroyed," Prime Minister Shehbaz Sharif said on Sunday after flying over the area in a helicopter.

Aid is starting to arrive after Pakistan launched its own appeal for help. The United Arab Emirates and Turkey have delivered tents and medicines and the US and Britain have pledged their support.

Earlier on Monday, the IMF said it had approved a $1.2bn loan for the country.
Add Comment