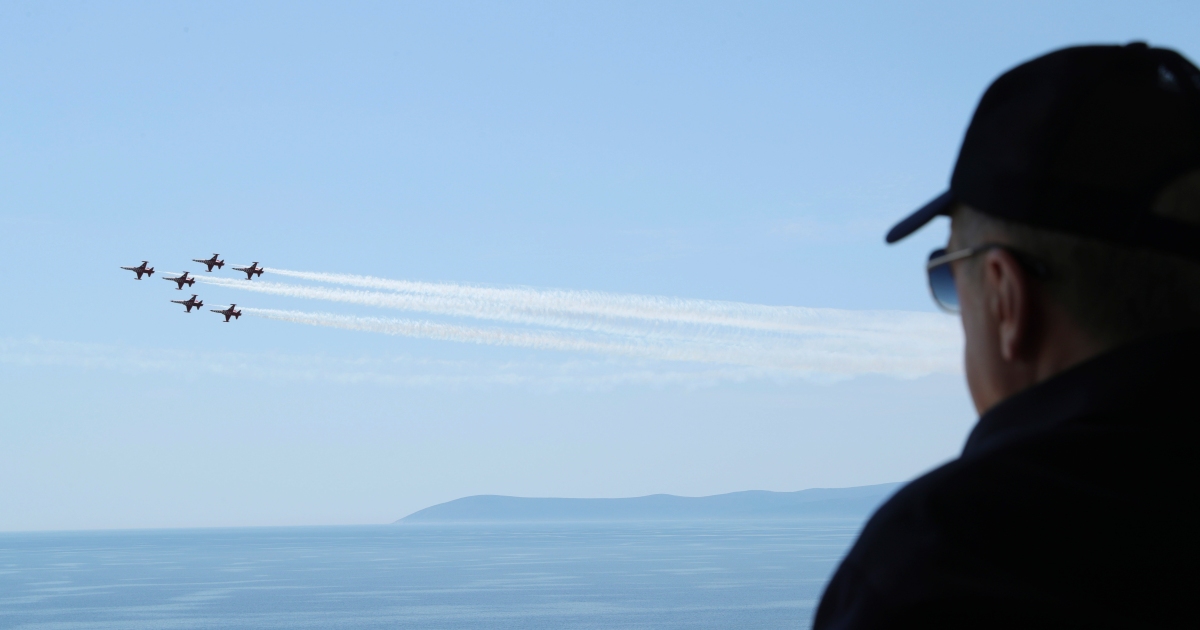 Why Turkey, Greece remain on collision course over Aegean islands

A lack of diplomacy exacerbates the latest dispute between Greece and Turkey over the islands in the Aegean.

The Eastern Mediterranean and the islands of the Aegean, where Greek and Turkish claims overlap, are once again in the focus amid the latest dispute between Greece and Turkey.

The complexity of the issue under international law is now further exacerbated by a lack of diplomacy.

The two NATO allies are still in a dispute over islands in the Aegean Sea. In particular, Turkey rejects what it calls a “militarisation” of some islands by Greece.

“Most of the Greek islands in the Aegean Sea are in close proximity to the Turkish mainland, such as Kastellorizo or Kos. Those islands were given to Greece [under the 1947 Paris Peace Treaty] on the condition of demilitarisation. However, Greece violates this provision,” said Gogus.

Meanwhile, from a Greek point of view, Turkey is making claims that are supported neither by the status quo nor by international law.

“Greece considers the Aegean Sea a fundamental part of the Greek territory given the thousands of islands and Greeks living there,” Sotirios Zartaloudis, associate professor in comparative European politics at the University of Birmingham told Al Jazeera.

“Moreover, the Aegean Sea is for Greece of great geopolitical and strategic importance as Europe’s southeastern frontier to the east and the Middle East along with the Black Sea,” he said. 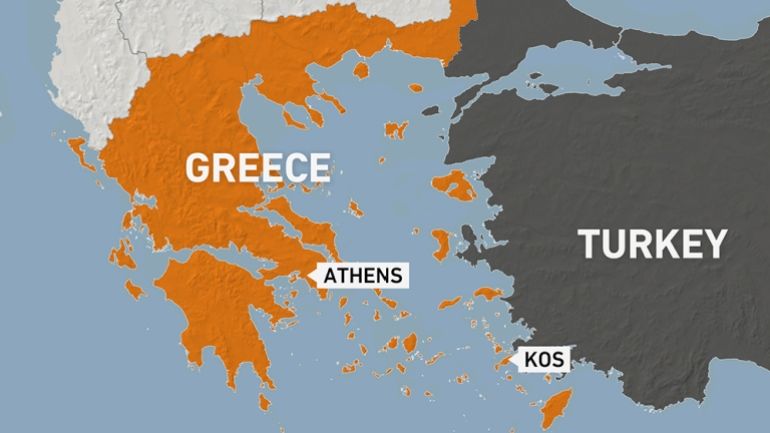 The legal bases are found in the treaties of Lausanne (1923), Montreux (1936) and Paris (1947), whereby the treaties signed in Lausanne and Paris regulate which island belongs to which country.

However, the treaty of Montreux was intended to replace the treaty of Lausanne partially, and Turkey has essentially been deriving its claims from the latter.

“The status of the Aegean islands regarding their ‘demilitarisation’ is a complex legal issue, and the two sides have very different interpretations regarding the obligations that emanate from these treaties. Given the current climate of mistrust, it is difficult to imagine how a bilateral negotiation in order to find a common language could succeed,” he said.

Two years ago, the sides came to the brink of military conflict as tensions rose over energy resources in the eastern Meditarennean. Since then, even diplomatic rapprochement seemed conceivable.

An affront, in Turkish President Recep Tayyip Erdogan’s view. The Turkish leader announced he would not meet again the Greek side until an “honest politician” was in front of him.

Since then, the dispute has spiralled, including a large-scale Turkish military manoeuvre, which Erdogan attended. In fact, his appearance made global headlines when he indirectly threatened war.

Not only did Erdogan warn Greece of “catastrophic consequences”, but urged his neighbour to “avoid dreams, statements and actions that it would regret”.

Despite the rhetoric from Ankara, Greece, thus far, has not yet ceased diplomatic efforts.

“Although the general media discourse in Greece remains very hostile towards Turkey, the response by the Greek government was relatively muted,” Papadimitriou said. 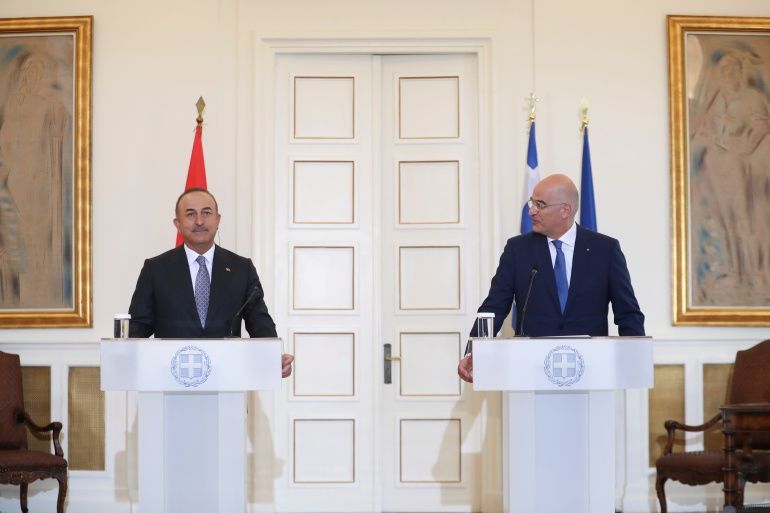 Greek Foreign Minister Nikos Dendias emphasised during the summit of Southeast European countries last week that Greece would not contribute to the escalation by participating in “insulting statements, illegal and inappropriate demands and accusations”.

At the same time, the Greek foreign ministry published 16 maps intended to document “the extent of Turkish revisionism”, intended to display Turkish territorial claims from 1923 to the present day.

“Mitsotakis, when asked if he would meet again with President Erdogan, replied: ‘of course, I would.’ This shows that the Greek government does not want to cut off all channels of communication with Turkey although, in terms of policy substance, the chasm between the two countries remains vast,” he said.

However, given Erdogan’s rhetoric, Athens will be even less inclined to demilitarise the islands.

Greece considers that military presence its right to self-defence, alluding to the numerous landing craft on the west coast of Turkey and regular violations of Greek airspace by Turkish fighter jets.

“The Greek governments claim they worry about Turkey’s heavy military presence near the Greek border and the Greek islands in the Aegean Sea, which Greece argues is a standby expeditionary force. A compromise could be a mutually agreed de-escalation – unlikely in my opinion,” Zartaloudis said.

The EU and NATO

Given this apparent conundrum, the EU called upon Turkey to behave “constructively”.

“Escalating steps and rhetoric” must be avoided and replaced with “good neighbourly relations”, Brussels urged.

NATO Secretary-General Jens Stoltenberg encouraged Greece and Turkey to settle their differences and avoid any action or rhetoric that could escalate the situation.

Nonetheless, the current situation raises various questions in Greece and, as so often in these cases, the future is complicated to predict.

“Public opinion in Greece is well versed in the hostile rhetoric from both sides of the Aegean. However, the general public does not realise how quickly an ‘accident’ in the Aegean can escalate into full-scale war,” Papadimitriou said.

“Many people speculated that the war in Ukraine would only last a few days. We are now into the fourth month of conflict with no signs of the war ending soon. A similar scenario for Greece and Turkey is not science fiction. That is why it is important that the rhetoric clams down and that channels of communication between the two sides remain open,” he added.

Most hope that Erdogan’s war rhetoric is merely part of his campaign strategy. With a presidential election looming, and a painful economic situation in Turkey – inflation is currently at 70 percent – some analysts are positive that the domestic situation in Turkey might have an impact on how the conflict proceeds.

“The possibility of a Greek-Turkish conflict also arises from internal dynamics in Turkey, if, for instance, the Greek-Turkish relations become salient among Turkish voters. Forces in favour or against Erdogan may want to use conflict to boost or dent his popularity.

“However, the hope is that NATO, the US, the military deterrence from both sides along with Erdogan’s rationalism about his own political survival will prevent an open conflict,” Zartaloudis said.