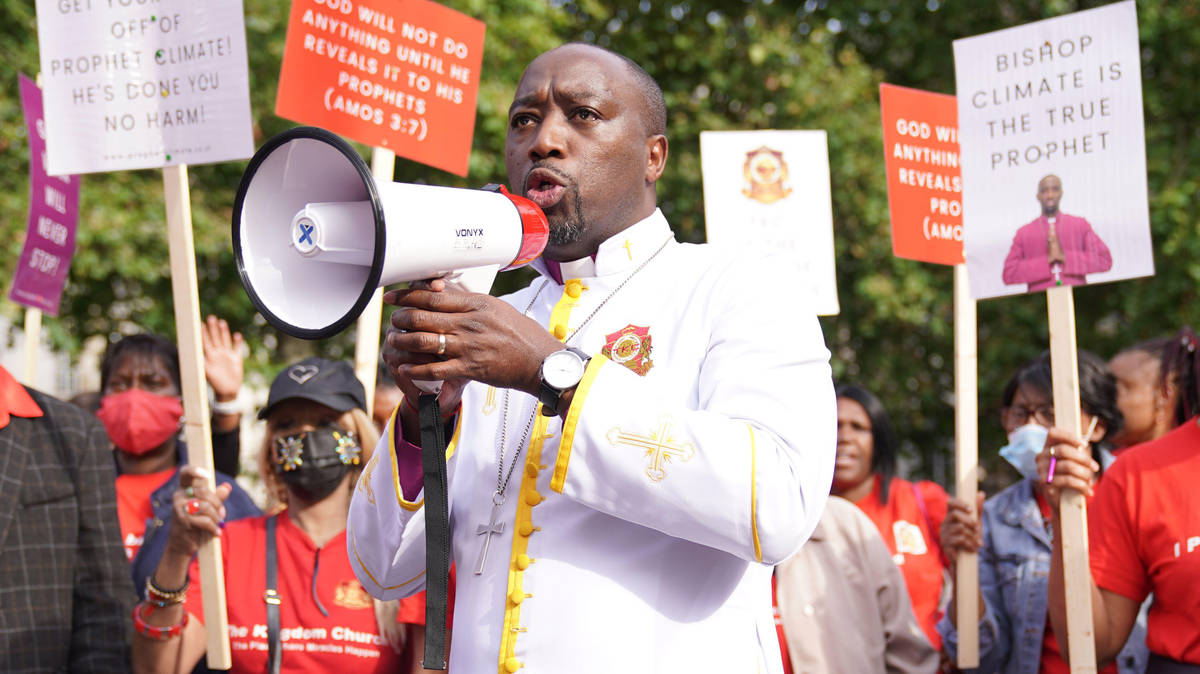 A preacher who sold bogus £91 kits to keep Covid at bay warned his flock that they could die if they didn’t purchase them, a court has heard.
Bishop Climate Wiseman, 47, who preaches at the Kingdom Church in Camberwell, south London, claimed the kits could cure coronavirus and prevent people from contracting the illness.

The faith healer has gone on trial accused of one count of fraud and two counts of engaging in unfair commercial practice over the year between March 23 2020 and March 24 2021.

He claimed his mixture, which is made from cedarwood, hyssop oil and olive oil, had cured at least ten people who had the respiratory virus and said investigators probing him were “the antichrist”, the Independent reported.

Jurors were told supporters could buy kits through the bishopclimateblog.com, prophet-climate.com, and prophetclimate.net by signing a Prayer Agreement Form.

They could also use the form to make donations without buying the kits.

In a blog, Bishop Wiseman said that by using the mixture, the ingredients would “act like an invisible barrier” and that the virus "and any other deadly thing” would pass over the user, prosecutors said.

Inner London Crown Court heard the kits were considerably more expensive than other items on offer, and that his sales pitches were all motivated by money.

In an instructional video, he said that people with Covid-19 should put their head under a towel over which some boiling water imbued with the oil had been poured.

He claimed the mixture kills the virus because it “can’t stand the power of the oil” and said after inhalation, Covid is coughed out of the body and simply dies.

He urged faithful viewers to purchase the kits as soon as possible or they “may end up dropping dead.”

Testimonial videos claimed a woman with a high temperature and no sense of taste felt “much better” after drinking some of it, and that a family had been cleared of any coronavirus symptoms which had “completely disappeared.”

He also claimed on his website that a woman who was so ill that she called paramedics was cured after a friend of hers gave her the oil and that a nurse in Yorkshire who'd taken it recovered after just three days.

Trading standards from Southwark Council were first made aware of the so-called cure on 24 March 2020, the first full day of the first lockdown.

The product was being advertised on bishopclimateblog.com.

On 31 March they contacted Bishop Wiseman and asked him to remove any mention of the supposed coronavirus-curing powers of the kits.

Some of the claims were taken out but he still claimed that the kits offered “divine protection during the coronavirus plague”.

His church in south London was also being investigated by the Charity Commission, which was investigating the Kingdom Church GB, a charity Bishop Wiseman and his wife were trustees of until summer 2020.

It was aware the oil was being sold as a Covid cure through a website linked to the charity, and Bishop Wiseman was asked to ensure that all links between Bishop Climate Ministries the charity and were immediately severed.

He said they were not sold through the Kingdom Church and that neither he nor the church claimed to cure the virus.

He later said he sold the oils through ‘Bishop Climate Ministries’.

However, a separate probe by undercover journalists, who bought the oil at the Kingdom Church, found people acting Bishop Wiseman's did claim it could cure the virus.

People answering the phone on behalf of Bishop Climate Ministries said the product could provide ‘protection from corona’ and had cured at least 10 people who had symptoms.

One woman on the phone, who called herself Minister Sharon, said the oil meant we could go ‘near people’ but reminded the caller of government social distancing advice.

She said ‘when you’ve got this oil you are very much protected’ and that the user ‘should not be able to get it from anyone or give it to anyone’.

She told the caller, who claimed to work in the building trade that she had been cured after testing positive for Covid and that sniffing the oil would remove the need to go to hospital.

After the undercover investigation on 29 April 2020, Bishop Wiseman denied he or any of his staff had misled anyone.

Despite this, he still claimed his oil worked, that he was healing the nation, which he was obliged to ‘as a prophet’ and someone ‘who God had used… in miracles.’

Material about the oils were still found online when trading standards probed again in January 2021.

Bishop Wiseman, from Camberwell, appeared in the dock wearing bishop’s regalia and showed little emotion as the case against him was read out.

Richard Heller, for the prosecution, told jurors that the case dates back to “a time I imagine most of us would prefer to forget.”

He added: “The defendant may seek to portray this trial as a challenge to his right to freedom of thought, conscience and religion, but I want to make clear from the outset that it is no such thing.

“Undoubtedly, the defendant portrays himself as having strongly held views.

“He also portrays himself as a vessel for God’s will and a miracle worker.

“This trial is not about his right to hold or practise those beliefs.

“The right to freedom of religion, which we all enjoy, does not permit a person to make false claims in the process of taking money for a product that simply isn’t capable of doing what you claim.

“To suggest, as the defendant might, that the manner in which religion is practised is incapable of conflicting with the criminal law is to misunderstand its reach.

“To be clear, the prosecution says the promotion of the oil sold by the defendant, under whatever name he chose to give it, was little more than exploitative commercial opportunism disguised as an article of faith.

“The claims made both by the defendant and in his name can’t possibly have been true.

“Whatever beliefs the defendant may hold, it doesn’t confer the right to sell bogus cures to fatal illnesses.

“He is not above the law and his faith isn’t exempt from its prohibitions.

“It concerns an exhortation to use a product of quite literally no medicinal value that had to be bought at a high cost and was not capable of doing what the defendant and his spokesmen claimed it could.”

The court heard a disclaimer was later added to Bishop Wiseman's blog where he said the oil had nothing to do with the Kingdom Church and another was added to videos where he said he never claimed he could cure people of virus.

He also claims he did not make a profit from the kits.

No treatments for Covid were given approval by UK medical regulators until June 2020 and only small number of vaccines and medicines are in use today.

The trial continues and is expected to last until the middle of next week.
#Coronavirus  #Vaccines  #COVID-19  #Covid

Oh ya 14 days ago
So in reality it has the same power as the so called vaccine. NONE. Watch the new movie on the net called Died Suddenly. It will explain how this vax is killing those who took it.
View all comments (1)Add comment