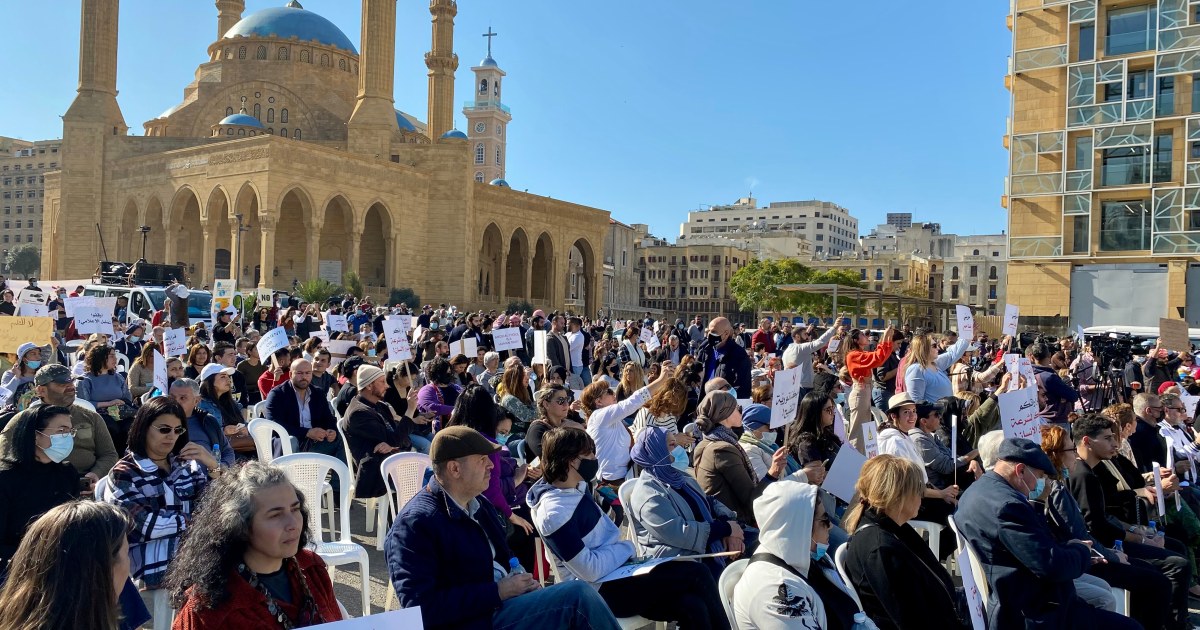 Taking the coronavirus vaccine in Lebanon remains a personal choice despite the country documenting a surging number of daily cases.

“People can inject themselves with whatever chemicals they want until the end of time, but I don’t want to,” 35-year-old Evelyne told Al Jazeera at a recent anti-vaccine protest in downtown Beirut.

She was among hundreds in Martyrs Square protesting against a government decision that requires public sector workers to get vaccinated or take frequent PCR tests at their own expense in order to go to work. They called it a “vaccine dictatorship”.

Lebanon since the holiday season has documented a surging number of daily COVID-19 cases, often breaking all-time records in the cash-strapped country. Taking the vaccine in Lebanon is still a personal choice.

On top of that, Lebanon is struggling to vaccinate its population, even though it is not in short of supply. Many people are simply refusing to do so.

Roland Adwan, vice president of a syndicate of workers’ unions that organised the protest, said the policy violates personal freedoms enshrined in the Lebanese constitution and international law.

“They want to force the vaccine, but which vaccine? There was a first dose, then second dose, now third dose, and what’s next? A fifth dose?” he said in a heated address.

“This is a lie to the world and even Donald Trump, the president of the strongest country in the world, said the World Health Organization are liars.”

Adwan soon started coughing but assured the audience it was because he smoked four packs of cigarettes every day.

Health Minister Firas Abiad dismissed the recent protest as the health ministry held another “vaccine marathon”, where thousands of people across the country could get the jab without appointments.

“I think their [protest] numbers were low, [and] cannot be compared to the 30,000 who came to the vaccine centres during the same day,” Abiad told Al Jazeera.

Abiad said he believes some of the protesters “were misinformed and some were disingenuous”. 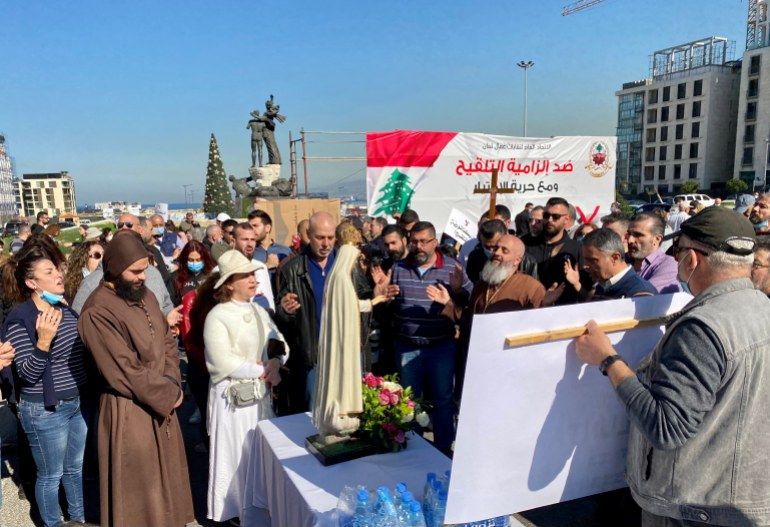 One Lebanese group on social media called Conscious Warriors For Truth distributed flyers at the protest, claiming the virus cannot be transmitted through asymptomatic patients, COVID-19 statistics are exaggerated, and the vaccines are unsafe and ineffective.

Meanwhile, on a WhatsApp group, a priest sent an audio recording calling on worshippers to attend the protest against the new vaccine regulation.

“If we don’t take action then our God will hold us to account, because we’re not taking a stand with justice,” he said. “In words we pray but in action we let the devil eat our children. Can you imagine now vaccinating little children at school?

“This is the real revolution that the Virgin Mary will spearhead.”

Mohamad Najem, executive director of Beirut-based digital rights organisation SMEX, told Al Jazeera the financial crisis in Lebanon and the lack of trust in the authorities has played a role in vaccine hesitancy and spreading misinformation.

“They would share lots of conspiracy theory videos, sequences with [US President Joe] Biden, and others,” he explained. “It seems that most are opposing the authorities because of the financial crisis, while a handful are really pushing anti-vaccine conspiracies.”

The World Bank describes Lebanon’s economic crisis as one of the worst since the mid-19th century. In just over two years, the Lebanese pound lost about 95 percent of its value, and the United Nations estimates that three-quarters of the population has slipped into poverty.

The near-bankrupt Lebanese government has not convened since last October over political disputes.

In October 2019, mass protests rocked the country, with hundreds of thousands criticising the country’s governing parties, senior financial officials, and private sector cronies who have controlled Lebanon for decades.

As a result, many have resorted to receiving their news and information through informal sources, including WhatsApp audio recordings. 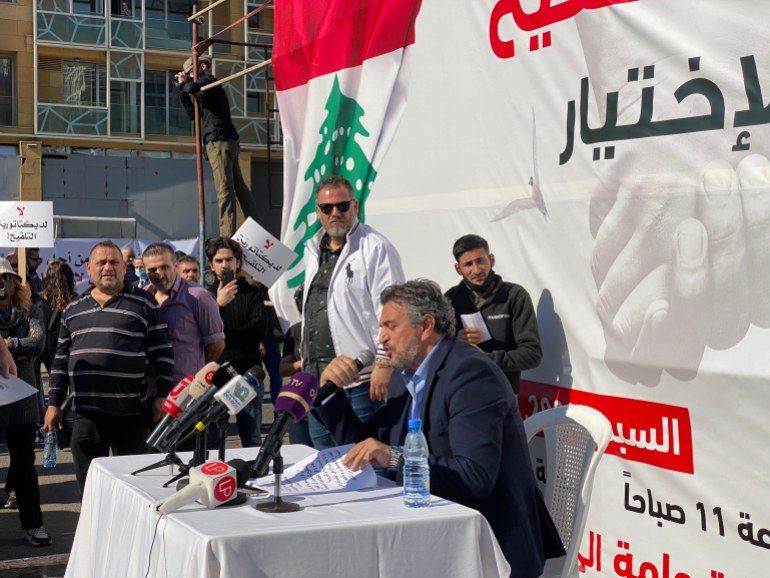 Maroun al-Khawli, head of the union alongside Adwan, said Lebanese officials are not aware of the extent of vaccine hesitancy.

“Three-thousand teachers do not want to get vaccinated, do you think the Lebanese government knows this?” he told Al Jazeera, claiming there is a “silent majority” of people who oppose the vaccine and vaccine mandates. “This is a group of people who are disenfranchised and oppressed, their voices are silenced.”

Al-Khawli is vaccinated but said he believes it does not affect whether one can catch or transmit COVID-19.

“So in the end it’s about how bad your symptoms are, and it’s therefore a personal choice,” he concluded.

However, research has shown the vaccine reduces to varying extent the ability to catch and infect others with the virus, which lawmaker Assem Araji reiterated to Al Jazeera.

“They are free to express themselves, and it’s their right to express whatever opinion they want,” said Araji, who also heads the parliamentary health committee. “But they cannot transmit diseases just because they don’t want to get vaccinated, wear a mask, or take other measures. You’re now harming other people.”

Some medical experts have told Al Jazeera that Lebanon’s COVID-19 response strategy has been arbitrary, focusing on reducing numbers, without any long-term containment or reduction strategy. However, Araji, Health Minister Abiad, and other health officials in Lebanon have said increasing vaccination is key to reducing the spread as much as possible.

This past week, Lebanon opened a UAE-funded emergency COVID-19 field centre in downtown Beirut, and Denmark donated 429,000 Moderna vaccine doses to the health ministry so children between five and 11 years old can start registering to take their first jabs.

However, Khawli and others said they believe the Lebanese government cannot push and promote strict measures for the unvaccinated.

“If the Lebanese government does not turn back against its health dictatorship policy, then there will be civil disobedience among thousands of people across Lebanon’s sectors,” said Khawli. 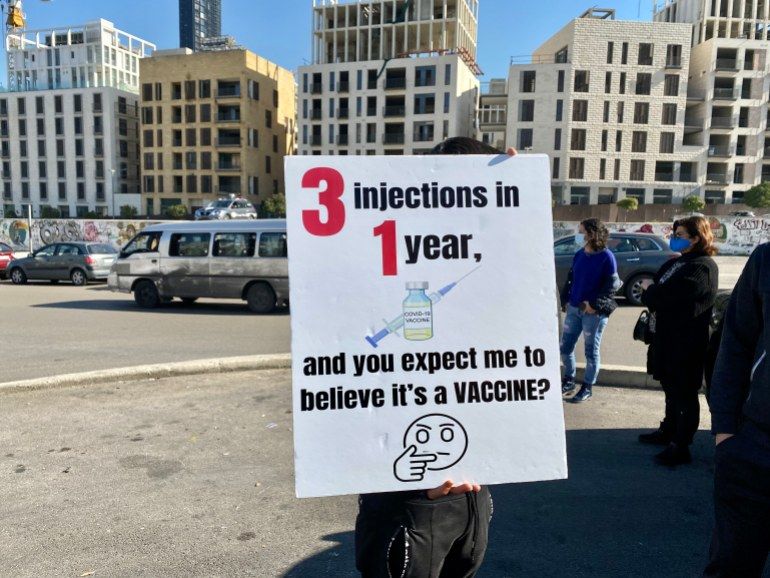